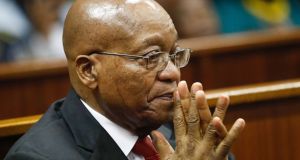 Former South African president Jacob Zuma insisted on Friday that the corruption charges he faces are politically motivated, after his first court appearance on the matter in Durban.

Mr Zuma, who was forced to stand down as South Africa’s president in February by the ruling African National Congress (ANC) party, addressed a crowd of more than 1,000 supporters outside Durban high court after his case was adjourned until June 8th next.

“The truth will come out. What have I done? I am innocent until proven guilty,” Mr Zuma reportedly said in his native Zulu, before adding “there are some people, even people whom I trusted, who have judged me as guilty already.”

The original charges against Mr Zuma, which arose from 783 suspicious payments he received, were controversially dropped in 2009 shortly before he was appointed South Africa’s president for the first time.

At the time the NPA said it had evidence of “political meddling” in the case. However, since 2009 the opposition Democratic Alliance party has taken the NPA’s decision through South Africa’s courts system, seeking to have it overturned.

Last year, the supreme court of appeal in Pretoria, South Africa’s highest court, declared that the decision to set aside the corruption charges was irrational. The court then ordered the NPA’s chief prosecutor Shaun Abrahams to reinstate them.

The case is unlikely to be heard before the end of this year, according to legal experts, given Mr Zuma is challenging the decision to prosecute him.

The case was adjourned on Friday to allow Mr Zuma’s legal team time to prepare the documents needed for the court to decide whether a review of the decision to re-charge the former president could go ahead.

Although Mr Zuma’s court appearance on Friday only lasted 20 minutes, the hearing was instructive in terms of gauging how much support he retains in the ANC after losing the presidency in March and standing down as the party’s leader in December.

The ANC announced on Sunday it would not support Mr Zuma during his trial, but it agreed to let party members do so in their personal capacity.

Aside from the local supporters from his home province who turned up in full ANC regalia, only a handful of senior party leaders took the opportunity to publicly back their comrade and former commander-in-chief.

Mr Zuma was flanked by former minister of co-operative and traditional affairs Des van Rooyen and Eastern Cape ANC councillor Andile Lungisa on his way into court. The ANC’s KwaZulu-Natal leader Sihle Zikalala was also reportedly seen inside the courthouse.