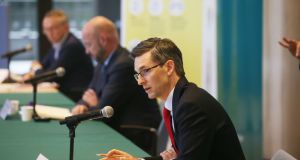 Another two people diagnosed with Covid-19 have died in the State, the National Public Health Emergency Team (NPHET) reported on Wednesday.

This brings to 1,748 the total number of deaths related to the disease in the Republic.

NPHET also reported a further 14 new cases of the disease, while one case was denotified, bringing the total number of confirmed cases here to 25,683. Some 8,313 of these have been healthcare workers.

There have been 1,976 clusters of Covid-19. The latest report from the Health Protection Surveillance Centre show there were an additional 96 outbreaks in private households in the week to last Sunday. There were a total of 1,217 up to Sunday compared with 1,121 a week earlier.

Most of these were in the east where 72 were recorded, while there were 13 in the northwest; eight in the southeast; and one each in the south, the west and the midwest regions.

There were three outbreaks reported in nursing homes over the same period. One of these was in the west while the other two were in the northeast.

A breakdown of the NPHET figures show there are currently eight confirmed cases in intensive care following two discharges in the past 24 hours. There are 12 confirmed cases in hospital. A total of 3,337 people have now been hospitalised, with 437 of these requiring ICU treatment.

The total number of tests completed now stands at 527,746 following the completion of another 4,387 in the past 24 hours. The number of positive tests stands at 28,877.

The data shows that 32 per cent of cases have been associated with community transmission, while 65 per cent were due to close contacts with an infected person, and two per cent related to foreign travel.

The State’s acting chief medical officer Dr Ronan Glynn warned the pandemic “is not over” and globally was accelerating.

Dr Glynn said the R-number, which is the reproductive rate of the virus, had increased above 1 and was “somewhere in the range of 1.2 and 1.8.”

Public health officials had seen large clusters of the virus linked to gatherings of 40 or 50 people in homes, Dr Glynn said.

The R-rate measures the number of infections each new case causes; a measure above one is an indication that infections are on the rise.

No new coronavirus-related deaths were reported in Northern Ireland on Wednesday, and the total number of fatalities from Covid-19 recorded by its Department of Health remains at 556.

However, nine new cases of coronavirus were confirmed, bringing the total number of cases identified in Northern Ireland since the beginning of the Covid-19 outbreak there to 5,799.

Just one fatality from the disease has been reported in the North in the last 10 days.

While the death toll reported by the Department of Health is 556, the Northern Ireland Statistics and Research Agency (Nisra) reported last week that 839 deaths involving Covid-19 had occurred in the North by July 3rd.

The department figures report deaths of patients who had previously tested positive for the disease, whereas the Nisra figures are based on information entered on death certificates.

The North’s health minister on Wednesday said he would recommend that the wearing of face coverings be made compulsory in shops in Northern Ireland.

Robin Swann will put the proposal before the Northern Executive, which will decide whether or not to adopt the measure.

Mr Swann said he had “no wish to pre-empt” the Executive’s decisions, but he was “firmly of the view that everything possible must be done to encourage the wearing of face coverings in retail stores and other indoor spaces where people are not eating, drinking or exercising”.

He also said that making the wearing of face masks mandatory in shops would provide “clarity and reassurance” for the public.

Face coverings are to be made compulsory in shops and other indoor public spaces in the Republic following a Government decision on Wednesday.

They are already compulsory in shops in Scotland, and will become so in England from July 24th.

People travelling on public transport in the North must wear face coverings, as must visitors to hospitals and care homes and anyone attending a hospital appointment.

The Union of Shop, Distributive and Allied Workers (Usdaw), which represents retail employees, has called for face coverings to be mandatory in shops in Northern Ireland.

Dr McBride told the BBC there was now “greater evidence” of the benefit of wearing face coverings to protect other people.