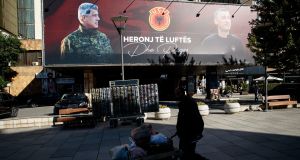 Kosovo’s president Hashim Thaci has been interviewed by prosecutors who suspect him of committing war crimes during a 1998-1999 conflict with Serbian forces, as EU-brokered talks between the Balkan states resume after a 20-month freeze.

He flew to The Hague to meet members of the Kosovo specialist prosecutor’s office, which has indicted him and several associates for alleged involvement in “nearly 100 murders” as well as torture, forced disappearances and other crimes during and after Serbia’s war with ethnic Albanian rebels in its former province.

Mr Thaci, who was a political leader of the Kosovo Liberation Army (KLA), has pledged to step down as president if he is formally charged over allegations that he vehemently denies.

“Today I am here to respect what I dreamed of and fought for – a free, independent Kosovo based on equal rights, multi-ethnic society and rule of law,” he said before entering the headquarters of the so-called Kosovo specialist chambers.

“I am ready to face the new challenge and succeed for my son, my family, my people and my country. Nobody can rewrite history. This is the price of freedom. I believe in peace, truth, reconciliation and justice. I believe in dialogue and good relations with all nations.”

The vast majority of the 13,000 people who were killed and the more than one million who were displaced during the war were ethnic Albanians, but armed Kosovar groups were accused of subsequently launching vicious reprisals against political opponents, Serbs, Roma and other ethnic minorities in Kosovo.

Serbia refuses to recognise Kosovo’s 2008 declaration of independence, and EU-mediated talks to resolve the issue and open the path for both states to join the bloc collapsed in November 2018.

The announcement of the indictment against Mr Thaci scuppered a planned Serbia-Kosovo summit at the White House last month, but the EU has now launched a fresh bid to kick-start negotiations.

Serbian president Aleksandar Vucic and Kosovo’s prime minister Avdullah Hoti held talks via video link with the German and French leaders last Friday and with senior EU officials on Sunday, and they intend to meet later this week.

“We agreed on the main elements of the process. We also agreed on the agenda of our next meeting that will take place this coming Thursday, in Brussels, in person,” Miroslav Lajcak, the EU’s special envoy for the talks, said on Sunday.

EU foreign policy chief Josep Borrell said the process “will require political courage from both sides, it will require commitment and engagement in the spirit of compromise and pragmatism”.

Kosovo demands full recognition from Serbia, but Belgrade says it will not simply drop its claim to its former territory and will not be swayed merely by the promise of eventual EU accession.