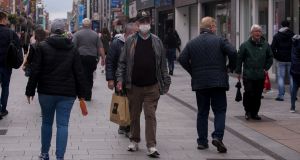 Business activity in Dublin fell at its steepest rate in almost two decades during the coronavirus pandemic as public restrictions to stem infections shut down the city, new data shows.

A survey produced for Dublin City Council showed the fastest decline in staffing levels for 11 years and the first reduction in employment since the depths of the economic crash in 2012.

The gauge of business activity, tracked by IHS Markit Dublin Purchasing Managers Index for the city council, covers the impact of the Covid-19 public health crisis between April and June.

The largest decline was recorded in the services sector but there were steep reductions in activity in manufacturing and construction over the three-month period.

The decline in the new business being conducted in Dublin was the sharpest on record, surpassing the fall in activity at the height of the global financial crisis in 2008.

There were signs of business returning to activity again in June as restrictions were eased and the economy began to reopen, coinciding with improving employment figures as those on Government income supports introduced during the pandemic began to fall nationally.

The decline in Dublin’s business activity was harder than in the rest of the country because of the proportionately higher level of services in the economy of the city.

The index is compiled based on responses from about 200 businesses every month.

Andrew Harker, economics director at IHS Markit, said the data showed the “severe impact” the Covid-19 outbreak and associated lockdown had on private businesses between April and June.

“There is some light at the end of the tunnel, however. The month of June saw the economy move closer to stabilisation, providing optimism that the gradual return to more normal conditions can help fuel a return to growth during the third-quarter of the year,” he said.