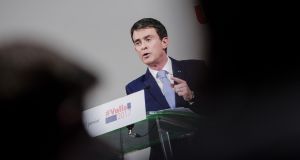 Voting got under way on Sunday to whittle down Socialist candidates for the French presidential ticket to two from seven.

Former prime minister Manuel Valls facing an outside risk of failing to make the run-off vote in a week’s time.

Opinion polls suggest no Socialist has much chance of winning the presidential election itself, but they show the outcome of the beleaguered ruling party’s primary having a potential impact on who actually does replace Francois Hollande at the Elysée palace.

Candidates to the left of Mr Valls, such as former education minister Benoit Hamon and ex-economy minister Arnaud Montebourg, are nipping at his heels in the polls as the pro-business Socialist has struggled to defend his government’s record.

After Sunday’s poll, a runoff will be held on January 29th to pick a candidate for the two-round presidential election on April 23rd and May 7th.

A force in French politics for decades, the Socialist party has seen support evaporate during Mr Hollande’s presidency as he has struggled to turn the economy around and alienated left-wing voters with his economic policies.

The Socialists’ choice of presidential candidate will be key for the chances of popular independent Emmanuel Macron, who is attracting middle ground voters who Mr Valls also appeals to.

Polls indicate conservative former prime minister Francois Fillon is most likely to emerge as the winner of the presidential election in a runoff against far-right National Front leader Marine Le Pen.

Mr Fillon’s programme includes cutting business taxes, relaxing labour laws and scrapping the 35-hour working week in an attempt to boost growth, while also cutting half a million public sector jobs as part of a drive to shrink the state sector.

But Mr Macron, a youthful and charismatic one-time investment banker, has been gaining ground and could make it into a presidential runoff - and win - if a leftwinger like Mr Montebourg or Mr Hamon secures the Socialist nomination, polls say.

A poll last week saw Mr Valls, who stepped down from government last month, coming out on top in both rounds of the primary vote with 37 per cent in the first round.

However, his lead narrowed after Mr Hamon made a stronger impression in a series of televised debates, with a proposal for monthly income support payments for all.

Mr Hamon and Mr Montebourg were kicked out of the Socialist government, led by Mr Valls from 2014 until 2016, for criticising its economic policies, which they said were too business-friendly.

Anyone who pledges allegiance to the political values of the left and pays a €1 fee can vote in the primary.

Party chief Jean-Christophe Cambadelis said a turnout of between 1.5 and 2 million from among France’s 44 million voters would signify a successful event, and that he still believed the election was winnable.

“The death knell of the Socialist party has been rung too early,” he told Le Parisien newspaper.