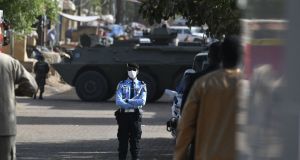 A police officer stands in a street outside the city hall as Niger’s outgoing president Mahamadou Issoufou arrives in the capital to cast his vote during Niger’s presidential election. Photograph: Issouf Sanogo/AFP/Getty

Seven members of Niger’s National Electoral Commission were killed during the country’s presidential election on Sunday as their car hit an explosive device, the government has confirmed.

Three others were severely injured in the explosion, in Gotheye village in the Tillaberi region of western Niger.

The west African nation has been battling rising attacks by Islamist extremists for years and Niger experts had warned that Sunday’s elections could see violence.

In January at least 100 people were killed when extremists attacked two villages near the border with Mali. Thousands of people have been killed and hundreds of thousands displaced despite the presence of thousands of regional and international troops.

“Niger has faced growing insecurity on many of its borders, including Mali, Burkina Faso, Nigeria and Libya,” said Ibrahim Yahaya Ibrahim, senior analyst for the Sahel at the International Crisis Group.

“Growing insecurity is one of the major challenges that the upcoming administration will have to face,” he said.

Former foreign affairs minister Mohamed Bazoum, who received about 39 per cent of the vote in the first round in December, is running against former president Mahamane Ousmane, who won nearly 17 per cent of that vote, according to the official results.

The winner of Sunday’s vote will succeed president Mahamadou Issoufou, who is stepping down after serving two terms, in accordance with Niger’s constitution.

Mr Issoufou’s decision to respect the constitution has been widely hailed and paves the way for Niger’s first peaceful, democratic transfer of power since its independence from France in 1960. The west African nation has seen four coups.

After voting at the city hall of Niamey, the capital, Mr Issoufou told journalists he was proud of Nigeriens for their political maturity and for setting a strong democratic example.

After voting, Mr Bazoum said he had just spent several weeks visiting villages in the hope that voting would “take place in a calm, disciplined and friendly atmosphere”.

Of Niger’s 23 million people, some 7.4 million are registered to vote. In the parliamentary and presidential elections which took place on December 27th, there was a turnout of about 67per cent. – Associated Press