More than 2,700, the majority children, die this year as vaccination coverage remains low 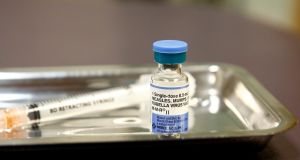 The measles vaccine must be kept cold, making it hard to transport in DRC. File photograph: Lindsey Wasson/Reuters

More people have died from measles in the Democratic Republic of the Congo than the total number of people who have died in a year-long Ebola outbreak, a medical charity has warned.

Since January, more than 145,000 people have been infected with measles, and 2,758 have died, the majority of them children, according to Médecins Sans Frontières.

“The actual epidemic is the biggest we’ve seen in the last decade,” Fabrizio Andriolo, emergency co-ordinator for MSF in DRC, told The Irish Times. “Especially in the West, it’s hard to imagine that measles could cause so many deaths.”

The Congolese government declared the measles outbreak an epidemic on June 10th. So far, 23 of the DRC’s 26 provinces have been affected, with more deaths in rural areas, because of the difficulty of accessing healthcare.

“Measles is a very contagious viral disease for which there is no specific treatment. The only way to avoid the disease spreading is with good vaccination coverage,” said Mr Andriolo. “In Congo the vaccination coverage lately is very low, and that’s the main reason why it’s spread so much.”

While babies should be vaccinated at nine months old, Mr Andriolo said that was not always happening.

“The responsibility for the supply of vaccines is the Ministry of Health. They’re trying their best to make it regular and stable but it has to be improved. When you go in the field you realise there are frequent ruptures. I know there have been efforts to improve but it needs to be better.”

Measles vaccines need to be stored in the cold, so can be especially difficult to transport, he said.

Eastern DRC is also struggling with an Ebola outbreak, which began in August last year, and has killed more than 1,800 people. On July 17th, the World Health Organisation declared it a “public health emergency of international concern”.

Medical workers have struggled to contain Ebola, due to outbreaks of conflict and distrust among the local community.

Mr Andriolo said the differences between the measles and Ebola responses in DRC were significant, possibly because Ebola outbreaks were more unusual. “What is really striking is that you see the lack of funding [for the measles response].”