One minute it was an Afghan wedding. The next, a funeral for 63

A suicide bomber killed 63 people and wounded 182 in an attack on a packed wedding reception in the Afghan capital, Kabul on Saturday night. The Taliban denied responsibility and condemned the blast. Video: Reuters 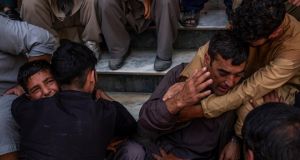 Relatives mourn during a group funeral for some of the 63 people killed on Saturday in a suicide bombing at a wedding in Kabul. Photograph: Jim Huylebroek/New York Times 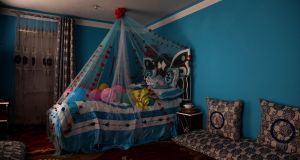 The couple’s new bedroom, at the groom’s family home, sits unused the day after a suicide bomber attacked their wedding in Kabul on Saturday. Photograph: Jim Huylebroek/New York Times 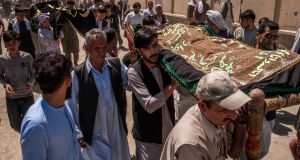 The bodies of two of the people killed on Saturday in a suicide bombing at a wedding are taken to their burial in Kabul on Sunday. Photograph: Jim Huylebroek/New York Times 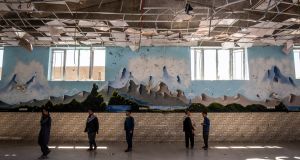 Damage inside the hall where a suicide bomber attacked a wedding in Kabul on Saturday. Photograph: Jim Huylebroek/New York Times

One minute, it was a wedding – nearly 1,000 guests packed under one roof, a thin partition segregating them by gender. Men shimmied to a live band, women spun to a DJ. Their invitation cards read: We celebrate “with a world of hope and desire”.

The next minute, a suicide bomber walked into the men’s section of the Kabul hall and turned it into carnage. Dozens were dead, on the dance floor and around their tables. The band perished on the stage. The women were left broken, wailing, and searching.

Even by the standards of Afghanistan, where dozens are killed every day in a long war that seems out of control, the attack on Saturday night was a shock. And not just because one bomber could end at least 63 lives, wound nearly 200, and scar hundreds of others for life.

It also was because of the choice of target and the timing, just as US negotiators are finalising a deal with Taliban insurgents to extricate US forces from Afghanistan after 18 years. The Islamic State terror group asserted responsibility on Sunday for the blast and identified the bomber in such a way as to suggest he was from neighbouring Pakistan, underscoring just some of the complexities in the conflict that the Americans will be leaving behind.

Violent loss in Afghanistan is such a daily reality that any celebration – a concert, or even dinner at a restaurant – often is avoided as unnecessary risk-taking. A wedding, a celebration of union, had remained the exception, an occasion when people could dance without guilt, laugh without hesitation. But for the bride and groom, who survived, and the hundreds of their relatives, that respite was snatched.

“Death is better for me than this,” Mirwais Alami, the groom, told a local television channel. “I can’t get myself to go to the funerals, my legs feel weak. Even if they tear me to pieces now, and take a piece of me to each home that lost a loved one so they get solace, their hearts won’t get peace.”

Although the Taliban wages the majority of the insurgent violence, the Islamic State group – which is no ally of the Taliban – also has established a small but stubborn foothold in Afghanistan and has claimed responsibility for many deadly explosions. Unlike the Taliban, the Sunni extremists of Islamic State, also known as Isis, often hit targets like Shia mosques, gyms and schools to foment sectarian divisions.

US negotiators with the Taliban have sought assurances that it will not support international and regional terrorist groups. Afghan officials worry that the United States is agreeing to a rushed withdrawal of its remaining 14,000 troops without leaving a realistic transition period to test the Taliban’s true intentions for peace or the extent of Islamic State’s threat.

“This war has turned this land into a slaughterhouse where nowhere is safe, where we don’t live but spend our days trying to stay alive,” Shaharzad Akbar, the chairwoman of Afghanistan’s human rights commission, wrote on Twitter. “How & when will we overcome this culture of murder & violence, this mentality of terror, this terrifying willingness 4 indiscriminate slaughter?”

Alami, the groom, is a tailor. He is 25. His bride, Raihana, was just graduating from high school, and is 18. Their families are working class, their homes modest.

From the engagement about seven months ago, he had spent about $14,000 (€12,600) on wedding expenses, from savings and from loans. “I brought pain, and nothing else – no happiness,” Alami said.

The wedding was not even supposed to happen this soon. When the couple became engaged, the bride’s parents had agreed on the condition that she not marry for two years, until she graduated and took some time. But about three months ago, the groom asked her parents if the wedding could be scheduled earlier, partly because in Afghanistan, it is a time of great uncertainty.

No one knows what might happen once the Americans withdraw, and whether the agreement between the Taliban and the United States will bring peace – or still more conflict.

Many Afghans are sceptical. They say the US agreement with the insurgents is rushing the withdrawal of troops because of President Donald Trump’s electoral calculations rather than the conditions on the ground. It could result in a full-blown civil war or the return of the Taliban in triumphant ways, they say. And that could cost Afghans their basic liberties.

These days, such fears are a factor in every matter of life. Makai Hazrati, the bride’s mother, said she had asked the couple to wait for at least after the 100th anniversary celebration of Afghanistan’s independence, on Monday, when she hoped threats would subside. But they had argued back, noting that soon after that occasion would be another of high threat: the Shia commemoration of Ashura next month, which has been repeatedly targeted by the Islamic State.

“I wanted to arrange a small gathering between two families in the house, but Raihana wanted to have a bigger wedding party in a hall,” Hazrati said. The Dubai City Wedding Hall, a spacious if modest venue in the west of Kabul, was booked for about 1,000 guests. The groom delivered all the groceries for the meal, and the hall’s kitchen staff prepared massive pots of pilaf rice, chicken drumsticks, chopped cucumbers and sliced melons.

When Raihana and several girlfriends went to a beauty salon hours before the ceremony, Hazrati made a stop to rent a special vest the bride’s family usually gives the groom. Alami had insisted that they not purchase one – a one-night rental would do.

The suicide bomber, identified by Islamic State as Abu Asim al-Pakistani, walked into the men’s section around 10.30pm. The couple had changed clothes once already, after wearing green for the ritual of putting henna in each other’s palms. In the women’s section, dinner was served, the food still on the table.

In the men’s section, music played and friends danced as they awaited dinner. The groom was in a separate room upstairs, where the ceremony of nikah, completion of a marriage contract, was under way.

“Four people were dancing in the middle, others were cheering them on,” said Ezatullah Ramin (23), a relative. “Then I saw a huge flame, and then a big bang.” Knocked out by the explosion, Ramin awoke surrounded by dead guests, badly mangled and many in pieces.

“There is an echo in my ear still – a mix of music and the blast,” he said.

Early on Sunday morning, the wedding hall was cordoned off by police as workers tried to remove the blood and debris. The floor at the men’s hall was washed clean, as if the blood of dozens had not been smeared there. Ceiling pieces dangled. The murals around the hall, of lush and serene scenery, were punctured by the ball-bearings that had been packed into the bomber’s suicide vest.

“I have been burying bodies all night, all morning,” said Mohammed Hamid, a relative of the groom. He had come to the wedding hall to load a truck with the pots of unserved food, sweets and sugar for the tea, and hundreds of cans of soda.

Some of that food went to the wake at the house of a neighbour of the groom, where two funerals were happening: one for a husband killed at the wedding hall, the other for his young wife, who had a heart attack after her husband’s body arrived home early Sunday morning.

The husband, Najib, was a close friend of the groom’s brother, Basir. “I feel guilty because I invited him to the party,” Basir said. “I thought we were going to have fun.”

Nearly two dozen bodies arrived in a small, tightly knit community where the bride’s family lives. Armed men dotted the narrow lane leading to a mosque, frisking visitors out of fear of a second suicide bomber. Men wailed as the final prayers were recited at the mosque’s small garden.

Some fainted, others were collapsed in corners – holding and consoling one another. Next door to the mosque, the women’s cries would grow louder as the bodies made a final stop, a final farewell with mothers and sisters.

Many of the bodies were not in a condition for the coffins to be opened. Then, one by one, the bodies arrived at a small cemetery, and were lowered into holes dug so close together they might as well have been one mass grave. At noon, many – including the bride’s father – were still searching for news of loved ones.

One of the bride’s younger brothers was still missing. “They say there’s one body at Aliabad hospital that is unidentified,” a man stepped into the mosque’s garden and announced. The bride’s father, wiping his tears with his sleeves, followed the man, down the dusty alley. – New York Times