Small farms inhabit some of the most at-risk landscapes, including hillsides, deserts and floodplains 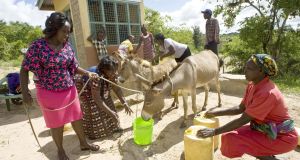 Harvesting of rock water in Embu, Kenya, has improved access to the resource for locals. Photograph: Lar Boland

Smallholder farmers are the backbone of the global rural economy, but they are bearing the brunt of climate change.

Worldwide, there are 500 million smallholder farms supporting two billion people, according to the International Fund for Agricultural Development, a UN agency based in Rome. These farms inhabit some of the most at-risk landscapes, including hillsides, deserts and floodplains.

Climate change multiplies the threats facing smallholders, endangering the natural assets they depend on and accelerating environmental degradation. In east Africa, drought can no longer be considered an unusual calamity. As a low rainfall area, the region must adapt to climate change.

While smallholder farmers are vulnerable due to the unreliable supply of water and the hotter conditions now facing their communities, in both agriculture and fishing, some groups are using adaptable methods to overcome these challenges.

In the Upper Tana region of Kenya, innovations such as conservation agriculture, fish farming in elevated ponds, goat rearing, water harvesting, tree planting, irrigation projects and the successful piping of water from the Kagati dam are helping smallholder farming communities to alleviate the effects of climate change.

The Upper Tana Natural Resources Management Project is an eight-year scheme, due to conclude this year, funded by the Kenyan government, the International Fund for Agricultural Development, the Spanish Trust Fund and the local community. The goal of the project is to reduce rural poverty in the area by increasing sustainable food production and the sustainable management of natural resources.

In Zanzibar, a semi-autonomous archipelago off the coast of Tanzania, where many of the rural poor depend on the sea to eke out a living, warming waters as a result of climate change are leading to lower fish catches and consequent overfishing. Time is limited, and local authorities are not waiting for a global consensus on fighting global warming to act against its impact in their region.

They are applying creative strategies to document these changes with the aim of finding concrete solutions, including the use of drones.

Given the name Dar Ramani Huria – a Swahili expression that can be translated as “the open map of Zanzibar” – the Zanzibar Mapping Initiative has been described as the most ambitious mapping project using drones in the world.

It was launched in 2016 in partnership with the World Bank, the Commission of Lands and Environment of Zanzibar and the State University of Zanzibar. Conducted by 17 spatial technology students from the university, the project deploys drones on a small scale for mapping portions of territory.

Zanzibar will use it for developing its policies to counter the effects of climate change and adopt new approaches to urban planning.