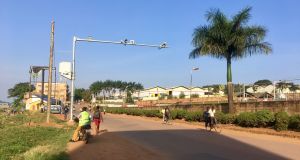 A surveillance camera in Kampala: some say such gadgets contradict the central tenets of democratic society. Photograph: Sally Hayden

Alex gestures up from a busy road, in the Ugandan capital Kampala, at a shiny camera on a long white pole. “They are watching you,” he smiles. “They are looking for . . . thieves. They make us safer.”

The boda boda motorbike driver is referring to just one of the hundreds of new cameras that have begun to appear around the city.

The cameras, believed to employ facial recognition software, are part of a new multimillion-dollar surveillance system, which police say will help them fight crime in one of the poorest countries in the world.

But critics are worried the cameras will be used to quell dissent against long-serving president Yoweri Museveni, particularly likely in the run-up to an election, and say they are another symbol of China’s growing influence on the African continent.

The cameras have been supplied by Chinese telecommunications giant Huawei. On Tuesday, the Ugandan police said installation around the capital was about 85 per cent complete.

“We would like the public to know that the [Ugandan police force] has an existing contract with Huawei to install CCTV cameras countrywide as a measure to strengthen law and order,” Ugandan police spokesman Fred Enanga said in a statement. “The cameras are already transforming modern-day policing in Uganda, with facial recognition and artificial intelligence as part of policing and security.”

Uganda is not the first African country to begin using this technology. Zambia and Egypt have both purchased surveillance cameras from Huawei, while the Chinese firm’s website says Kenyan capital Nairobi began using their “Safe City” system years ago.

At least 1,800 cameras were installed across Nairobi, as well as 200 traffic surveillance systems and a national police command centre, the company says. Huawei boasts that the system worked during Pope Francis’s 2015 visit to Kenya, and says regional crime has dropped by 46 per cent.

“We have long been concerned with the lack of transparency and accountability in the government’s procurement, installation and application of surveillance gadgets and software, both with and without Huawei,” said Dorothy Mukasa, the executive director of Unwanted Witness, a Uganda-based organisation that campaigns for uncensored online usage.

Ms Mukasa told The Irish Times in an email that she felt the arbitrary use of mass surveillance contradicted the central tenets of democratic society.

“Surveillance in public spaces can most likely be used to clampdown on dissent, limit the enjoyment of legitimate assemblies and association, enjoyment of privacy as well as freedom of expression, particularly as the country gears up for 2021 general elections,” she said.

Ms Mukasa also said she was concerned about China’s surveillance track record on its own citizens, something that “can easily be exported to states like Uganda that have weak safeguards and no accountability for use of technological surveillance . . . Citizens need to begin demanding transparency and accountability from their governments.”