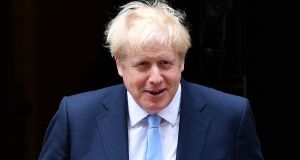 Boris Johnson’s last inaugural visit to Berlin, as foreign minister in November 2016, was a frosty affair.

At a press conference he spoke his first words in German and, instead of returning his host’s handshake, offered a fist bump. Frank-Walter Steinmeier, then Berlin’s chief diplomat, strained to remain diplomatic towards a man he clearly viewed as a buffoon.

Chancellor Angela Merkel has an especially dazzling smile for vexing visitors and no doubt this will be on full display on Wednesday evening when she receives Mr Johnson.

As an inaugural visit to Berlin – before Dublin – the new British prime minister will be greeted with full military honours but fitted with a tight German corset: brief statements before talks, no press conference with questions after. Berlin is, officially at least, not party to the Brexit talks and, in keeping with her position since 2016, Dr Merkel has rebuffed any British attempts to make it one.

Instead, in her pre-talk remarks, she will repeat her determination for a constructive future partnership with Britain on trade and security affairs. And she will urge renewed efforts to break the Brexit deadlock even if – from Berlin’s perspective – nothing has changed.

Mr Johnson, like his predecessor, has been very clear about what he doesn’t want. Apart from ramping up the rhetoric – dubbing the backstop “undemocratic” – Mr Johnson, like Mrs May before him, has yet to communicate in detail a viable alternative.

But his four-page letter to European Council president Donald Tusk on Monday was possibly written after a careful study of Dr Merkel’s recent Brexit remarks.

Last February in Japan, Dr Merkel urged negotiating parties to “be creative and listen to each other” to preserve the integrity of both the EU single market and Northern Ireland within the United Kingdom. Since then, she has repeated that the answer to solving the deadlock lies in the second stage of talks, on a future UK-EU relationship.

This chimes with Mr Johnson’s proposal on Monday to replace the backstop with “a commitment to put in place such arrangements as far as possible before the end of the transition period, as part of the future relationship”.

Instead they wonder if London could, with Dublin’s backing, be promised something in the future relationship that would neutralise the British allergic reaction to the backstop – or obviate the insurance policy entirely.

Dr Merkel has repeatedly expressed her “unconditional” support for Ireland in the Brexit process and, last April in Dublin, expressed her determination to avoid a no-deal outcome.

“We must be successful,” she said at a press conference in Farmleigh, adding that “where there’s a will there’s a way”.

Since then, however, extra-time Brexit diplomacy has failed to find a creative solution that avoids the law of unintended consequences over a hard Irish border.

Speaking in Iceland on Tuesday, Dr Merkel repeated her belief that there is “no need to reopen the Brexit deal for a practical solution” – something Berlin, like Brussels and Dublin, has refused to consider.

Instead she insisted that the “backstop issue . . . is a question of the political declaration on future ties” and not the withdrawal agreement.