Official at Macron’s Elysée palace says remarks by the Turkish president ‘are not statements, these are insults’ 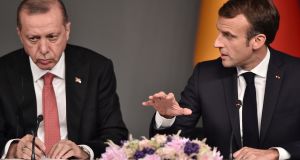 Turkey’s president Recep Tayyip Erdogan has called Emmanuel Macron “brain dead” as he hit back against the French leader’s criticism of Turkey’s treatment of its Nato allies.

Mr Erdogan said Mr Macron had a “sick and shallow” understanding of the transatlantic security alliance after the French president this month said Nato was suffering “brain death” because of a lack of co-ordination among allies, notably over Turkey’s invasion of northern Syria in October.

“I’m addressing Mr Macron from Turkey, and I will say it at Nato: you should check whether you are brain dead first,” Mr Erdogan said on Friday.

Mr Macron on Thursday had warned Turkey that it could not expect support from Nato allies if it continued to carry out military operations in Syria without consultation or co-ordination.

France promptly retaliated by summoning the Turkish ambassador in Paris to explain Mr Erdogan’s comments, deepening an embarrassing argument between the two heads of state as Nato prepares to meet for its 70th anniversary summit in London next week.

“On the latest excesses by the Turkish president, these are not statements, these are insults. We expect President Erdogan to clarify,” said an official at Mr Macron’s Elysée palace, after calling in Turkey’s lead diplomat in Paris.

Mr Erdogan last month defied warnings from Nato allies to launch a military operation against Kurdish militias in northeast Syria after the US had withdrawn its own forces.

The assault targeted members of the YPG, an armed group with close links to a Kurdish militia that has fought a decades-long insurgency on Turkish soil and is seen by Ankara as a threat to national security. However, the YPG also played a leading role in the US-led campaign against Isis jihadists in Syria.

The Turkish offensive triggered fury in Washington and in European capitals, prompting warnings that it could lead to an Isis resurgence.

Diplomats say Turkey is now refusing to sign off on defence plans for other Nato members, such as the Baltic states, unless the alliance backs Ankara’s stance that the YPG Kurdish militia is a terrorist group.

Mr Erdogan, a populist leader renowned for his fiery rhetoric, has frequently locked horns with other European leaders. In 2017 he described the Dutch government as “Nazi remnants and fascists”, and accused German chancellor Angela Merkel of deploying “Nazi measures”.

Despite such tensions Turkish officials have sought to build better relations with EU countries over the past two years. The EU is Turkey’s biggest export partner, and Ankara is eager to secure an upgrade of its customs union with the 28-member bloc as well as visa-free travel for Turkish citizens to a group of European nations.

Turkey, which hosts 3.6 million Syrian refugees, is also a key partner for European countries on migration as well as trade, counter-terrorism and security.

Mr Macron has played a leading role in efforts to maintain a dialogue. In 2017 he told the French weekly magazine Le Point that being president of France was “not that cool” because “I am the one who has to talk to Erdogan every 10 days”.

Diplomats say that frequent contact between the two leaders has continued. – Copyright The Financial Times Limited 2019