Boko Haram kill at least 60 in attack on Nigerian town 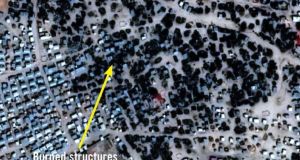 A satellite image of the town of Rann in northeast Nigeria showing the structures burned down by Boko Haram in a recent attack Photograph: Amnesty Internation Nigeria/Twitter

The militant group Boko Haram killed at least 60 people when it renewed its attack on the northeast Nigerian town of Rann on Monday, Amnesty International said on Friday.

The attack was one of the bloodiest in the group’s decade-long insurgency.

It came two weeks after Boko Haram had overrun the same town, driving out Nigerian soldiers and marking its re-emergence as a force capable of taking army bases.

We condemn #BokoHaram for consistently and deliberately targeting civilians in #Rann: killing people and burning structures. Burned structures after #BokoHaram attack of Monday in #Rann: pic.twitter.com/BxojShLaAR

“This attack on civilians who have already been displaced by the bloody conflict may amount to possible war crimes, and those responsible must be brought to justice,” Osai Ojigho, the rights group’s Nigeria director, said in Friday’s statement.

“Witnesses told us that Nigerian soldiers abandoned their posts the day before the attack, demonstrating the authorities’ utter failure to protect civilians,” Ojigho said.

A security source told Reuters Nigerian troops had returned to Rann, as well as Cameroonian troops from a Multi-National Joint Task Force, after the first attack, on January 14th.

After the Cameroonians went back across the border, the Nigerian soldiers left, because they didn’t have enough troops, weapons or equipment, the source said. – Reuters