France, along with US and other powers, had exerted pressure on prime minister Hariri 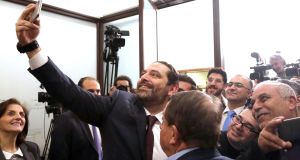 French president Emmanuel Macron has welcomed the emergence of a new Lebanese government nine months after the country’s first parliamentary election in nine years. He also reaffirmed “his commitment to the sovereignty, stability and security of Lebanon”. The EU, US, UK and Arab League also congratulated Lebanon on the achievement.

After apologising for the delay in naming his 30-member cabinet, prime minister Saad al-Hariri said: “No one can put their head in the sand any more. All the problems are known and the causes of corruption, waste and administrative deficiency are also known.” He called for “bold reforms” to meet “economic, financial and service related challenges in addition to Israeli threats”.

Hariri came under strong pressure to resolve the cabinet crisis from France, the US and other interested powers. State institutions had been paralysed and $11 billion (€9.6 billion) in loans and grants for infrastructure investment had been put at risk by squabbling over Christian, Sunni Muslim, and Druze representation and allocation of portfolios.

Hariri ended the deadlock by capitulating to the constellation of partisan forces that were victorious in the May 6th poll. His western- and Saudi-sponsored Future Movement, formerly the largest bloc, lost seats and was overtaken by the pro-Iran Hizbullah-aligned Free Patriotic Movement founded by president Michel Aoun. Hizbullah and other allies also gained seats, giving them a solid majority.

Since entering parliament in 1992, Hizbullah’s political wing has limited its deputies to about a dozen and has kept a low profile, asserting influence through allies.

Lebanon’s laissez-faire, service-oriented economy has been on the brink of disaster for decades. The country’s public debt is estimated at 141 per cent of gross domestic product. Infrastructure destroyed or damaged during the 1975-90 civil conflict and Israel’s 2006 war has not been restored. Electricity is rationed, piped water is in short supply, raw sewage is pumped into the sea and dumped on to the land, and refuse landfills are overflowing.

Lebanon’s cities are enveloped in pollution from emissions from vehicles, heating plants, and smouldering rubbish. Lebanese youths have taken to the streets to protest against the failure of the weak state to deliver and of politicians to form a government which can cure the country’s ills.

The depleted and degraded resources of Lebanon, with a population of 4.5 million, are strained by a million destitute Syrian refugees and half a million Palestinian refugees dependent on UN relief. The war in Syria has disrupted the lucrative transit trade from Lebanon to the Arab hinterland and discouraged tourism while violence has spilled over into Lebanon.

The predominance of Hizbullah-partnered parties in the new government could create problems for the Trump administration in its drive to curb Iran’s political and military activities in Iraq, Syria and Lebanon. Designated a terrorist organisation by the US in 1995, Shia Hizbullah has close religious, political and military ties to Iran.