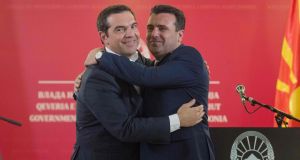 Greek prime minister Alexis Tsipras has visited North Macedonia for what he called a “historic” trip to cement the recent normalisation of the countries’ relations and discuss deeper co-operation in areas ranging from defence to diplomacy to tourism.

Mr Tsipras is the first leader from Greece to travel to the neighbouring state since it gained independence from Yugoslavia in 1991, when Athens declared its implacable opposition to its use of the name “Macedonia”.

Athens said it implied a territorial claim to the Greek region of that name and the legacy of its ancient ruler, Alexander the Great, and the row paralysed relations until a deal was done last year to rename the country “North Macedonia”.

The rapid thaw between the neighbours, led by Mr Tsipras and his counterpart in Skopje, Zoran Zaev, allowed North Macedonia to sign a Nato membership deal in February and to hope for the start of EU accession talks in June.

“We have lost a lot of time and now we must rapidly catch up. We want to build a strong bond of trust and stability,” Mr Tsipras said after the leaders took a selfie with their cabinet ministers outside government headquarters in Skopje.

“When I used to take a plane to Europe, the pilot would avoid the airspace of what was the former Yugoslav republic of Macedonia. Now we will no longer have this nonsense. We might fly around here just to say hello,” he added.

Mr Zaev tweeted their photo with the message: “I met my friend and colleague Alexis Tsipras. The first prime minister of Greece to visit North Macedonia. Really a historic day.”

Mr Tsipras went to Skopje with 10 ministers and dozens of Greek businessmen, who met Macedonian counterparts to sign deals on defence co-operation, opening embassies and a new border crossing, and on economic projects spanning transport, tourism, communication and energy.

“Our visit to the Republic of North Macedonia is a historic step for the Balkans and for Europe. We are here to find solutions, to look forward, to build bridges instead of walls,” the Greek premier said.

While gaining strong support and praise from the EU, United States and Nato – and reportedly being nominated for the Nobel Peace Prize – both leaders face fierce opposition from nationalists at home, and Mr Tsipras could be ousted in parliamentary elections later this year.

Mr Zaev said that since the agreement was signed last June at Lake Prespa, which straddles the two nations’ border, “we’ve made history on several occasions” by turning Greece into a leading advocate for North Macedonia’s EU and Nato membership.

“It’s a victory for the policy of progress, of peace and of friendship between our nations,” he added.