From Syria to Laois: 'Even with the death all around us we wanted to live’ 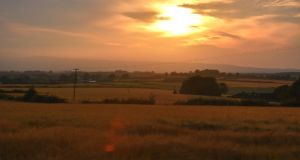 When you live in Syria you learn to recognise the sound of different types of bombs. You know to run to shelter when you hear that high-pitched whistle overhead.

“If it’s a small bomb it comes like a sssh sound but if we hear a whistle we know it’s going to be a big one,” says Amro Abou Hajar, using hand movements to recreate a bomb speeding towards the ground. His eldest brother Mohammed watches him from across the room. He takes a sip of coffee and places the teacup on the table. “How can you describe the sound of death?” he asks.

The Abou Hajar family has gathered in the sitting room of their small home in Portlaoise. Kawkab Abou Hajar has carefully arranged a tray filled with sweet Syrian desserts on a table in the centre of the room. Her youngest child, 13-year-old Abeer, sits on a chair in the corner beside Amro (19), while nearby their brothers Mohammad (24) and Osama (22) explain how the family came to Ireland.

It started with the protests in 2011, says Osama who studied electrical engineering in Aleppo before fleeing Syria. “We just wanted to be like any other human in this world. We looked at the rest of the world and saw the freedom they had.”

When the violence broke out later that year, Kawkab became worried about her children’s safety. “I was more afraid for my children than I was for myself. I didn’t want them to go outdoors, even for groceries,” she says. “Especially when the planes and the aircrafts came.”

No one was safe, even schoolchildren, says Mohammed. “Syrian schools have big back yards. It’s a special shape so you can recognise it even from above. People escaped to the schools because they thought schools would be safe. Then they bombed the schools.”

The family come from a city called Al Ma’arra in the northwest of the country. In 2012, Kawkab and her children moved to a smaller town where they believed they could be safe. Her husband, Abdul Rahman, was diabetic and had health problems with his kidneys.

“I lived with my father for 25 days in the middle of the war when the rest of the family was gone,” says Osama. “My father was too sick and he wanted them to go ahead. He needed someone to bring the bread for him, to bring his medicine.”

Osama had worked as a volunteer for the Syrian Red Cross with his brother before the war broke out. He continued to volunteer after his family left the city.

“I had done some first aid. You have to use your experience to help people. You can’t watch people suffer and do nothing. We had this background of volunteering so we had to do something for our country.”

One day a helicopter dropped a bomb on the building behind the apartment block where they lived. Osama joined the volunteer forces in the search for survivors after the explosion. They only found bodies which they lifted from the rubble into the street.

“That was so hard for me so I told my father I can’t stay another moment here,” says Osama. “The next day we prepared our car and escaped the hard way through the farms and fields.”

After two months together in the town of Idlib, Mohammed and Osama decided to return to Aleppo to complete their university studies. The rest of the family travelled to Lebanon where an uncle was living in Beirut.

The family’s hometown was no longer under the control of the Syrian regime which meant Mohammed and Osama were at risk of being arrested in Aleppo. The boys were often stopped on the streets for questioning by government forces. “Even if you were a woman or a child you could be arrested just because you were from Al Ma’arra. Sometimes they took our IDs for half an hour. We were afraid, we didn’t know what to do.”

When Osama finished his exams in autumn 2013 he quickly arranged to leave Syria for Beirut, using the only road open for those travelling to Lebanon.

“When I think about that situation now I ask myself how did we survive,” says Mohammed. “Even with the death all around us we wanted to live. Osama could escape but I still had some exams to do. I told him you should go and I will follow.”

In Lebanon the family registered with the United Nations Refugee Agency (UNHCR) joining over a million others who had sought refuge, fleeing the violence and destruction in their homeland.

Abdul was given dialysis for his kidneys but his health continued to deteriorate. The family applied for resettlement abroad and in 2014 were selected by Ireland due to Abeer’s connection with the country.

During a visit to her brother in Dublin in 2002, Kawkab gave birth to her daughter. Abeer received an Irish passport under the State’s former constitutional entitlement to citizenship to those born in Ireland. Now, 12 years later, her accidental Irish citizenship meant the family had a stronger chance of seeking asylum on Irish soil.

The family was selected, along with two other families with cancer patients, to travel to Ireland in June 2014. Abdul was offered medical care for his kidney trouble the moment the plane touched down in Dublin airport. The family were sent to the Balseskin reception centre in Finglas where they spent a year before being relocated to Portlaoise.

Back in Syria, Mohammed had decided to travel to Lebanon where he hoped he could apply to join his family in Ireland.

“When I was in Lebanon I remember my mum calling every day. I went nearly three years without seeing my family. My mother tells me I was always saying I want to come and see you.”

Mohammed looks across the room at his mother who is wiping tears from her eyes. “Smile, please try and smile,” says Mohammed, reaching out to her. Kawkab blows her nose and looks up, smiling lovingly at her eldest son.

A few months after moving to Portlaoise the family received a letter saying Mohammed would be brought to Ireland under family reunification.

Mohammed’s voice shakes as he describes walking through Dublin airport into his mother’s arms. “After two years of being separated I cannot describe the feeling of seeing my mum, my dad, my lovely sister.”

“In Lebanon sometimes I would become depressed thinking there’s no chance of seeing my family again. I just focused on all the memories from before the war because I believed we wouldn’t have any new memories together.”

“I heard about people reaching Europe illegally on the boat. At that point I was thinking I could go to sea maybe just to meet my family again. Three years without seeing them is a really long time.”

Kawkab continues to worry about her 85-year-old mother and 90-year-old father who are still live in Al Ma’arra. Every day she texts her parents using What’s App to make sure they’re ok. She hopes that they will also be reunited in Ireland.

Osama is now studying in Dublin and Mohammed hopes to continue his training as a civil engineer. The family desperately miss home but are grateful to the Irish Government for welcoming them into Ireland.

“We always tell people that Syria is not just about bombing and violence,” says Mohammed. “The first alphabet came from Syria, so many ancient cultures came from Syria, Steve Jobs’ dad was from Syria. Syria has traditions, rivers and mountains.”

“We want everyone to know that we are more than just a war.”

A special report looking back over the year at the increasingly desperate plight of migrants trying to make a new life in Europe.