Anguish and unrest in Amhara over Ethiopian state of emergency 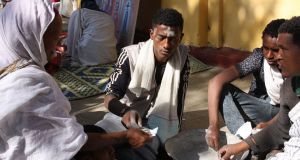 People outside a Gondar church with crosses marked in ash on foreheads. Photograph: James Jeffrey 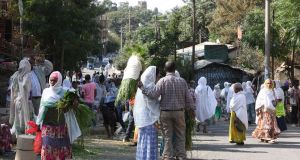 Crowds buying reeds outside a church, a traditional form of decorating floors during holidays and religious festivals-in the distance is the towering 17th-century castle of Emperor Fasiladas rising out of the Royal Enclosure, from where Gondar was once the seat of Ethiopian power and rule. Photograph: James Jeffrey 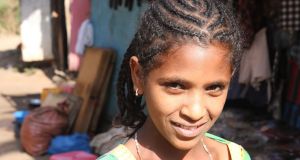 Meron, 11, standing in front of the clothes store where she works. Photograph: James Jeffrey

In the Ethiopian city of Gondar the chewing of the mildly narcotic plant khat stimulates animated conversation about recent events during the country’s ongoing state of emergency.

“If you kill your own people how are you a soldier – you are a terrorist,” says 32-year-old Tesfaye, plucking at a bunch of green leaves. He recently left the military after seven years of service around the border with Somalia. “I became a soldier to protect my people.”

Demonstrations last August in the country’s Amhara region, and particularly the cities of Bahir Dar (the region’s capital) and Gondar (the former historical seat of Ethiopian rule) signalled the spreading of protests to Ethiopia’s second most populated region.

For much of the previous year, protesters in the Oromia region, to the south of Amhara, had been engaged in anti-government demonstrations to highlight perceived discrimination against the Oromo people.

The Oromo and Amhara are Ethiopia’s largest ethnic groups and both claim they are excluded from the country’s political process and economic development.

On October 9th, 2016, following further unrest, the ruling Ethiopian People’s Revolutionary Democratic Front party declared a six-month state of emergency, which was extended for four months at the end of March this year.

On the surface, the state of emergency’s measures including arbitrary arrests, curfews, bans on public assembly, and media and internet restrictions appear to have been successful in Amhara, as across the rest of the country.

Now in Gondar and Bahir Dar, businesses are open and streets are busy, following months when the cities were flooded with military personnel under the co-ordination of a new entity known as the “Command Post”, and everyday life ground to a halt as locals shut up shop in a gesture of passive resistance.

Speaking to residents, however, it’s clear discontent hasn’t abated. Frustrations have grown for many due to what’s deemed gross governmental oppression.

“I know it takes time to become democratic, but when it’s been 25 years!” exclaims Stephanos, a hotel owner in Gondar. “Because we can’t protest we pray. People are saying: ‘Where are you God? Did you forget this land?’”

The four-month extension to the state of emergency contains less sweeping powers than before. Now police need warrants to arrest suspects or search their homes, and detention without trial has officially been ended. But grievances remain about what’s already happened.

“Someone will come and say they are with the Command Post and just tell you to go with them – you have no option but to obey,” Dawit, working in Gondar’s tourism industry, says of hundreds of locals arrested. “No one has any insurance of life.”

The government has been accused of imprisoning, torturing and abusing thousands of young people and killing hundreds more in order to restore a semblance of order.

“The short-term effect of the state of emergency [has been] continued fear and distrust of the regime by the Ethiopian people,” says Tewodrose Tirfe of the Amhara Association of America. He points to “continued loss of hope for a better form of government where basic human rights of the Ethiopians are respected, [and] deeper resentment and anger at the government driving young people to the armed struggle.”

For many Amhara the memories of what happened during protests last summer are still raw, especially for Bahir Dar residents.

Tens of thousands gathered in Bahir Dar’s centre on August 7th before marching along the main northeast-running road out of the city toward the Blue Nile river, carrying palm tree leaves and other greenery as symbols of peace.

But just over a kilometre on, the march descended into carnage. “Two people on my right side dropped dead,” says 23-year-old Haile, who was marching that day. “One had been shot in the head, one in the heart.”

It’s estimated 27 died that day, the death toll rising to 52 by the end of the week. A total of 227 civilians have died during unrest in the Amhara region, according to government figures, while others claim the figure is much higher.

“Security forces suddenly emerged from buildings and shot into the march for no reason,” says an Ethiopian priest, who spoke on condition of anonymity. “They were waiting for an excuse to shoot.”

Such violence was unprecedented for Bahir Dar, a popular tourist location, known for its tranquil lake and laid-back atmosphere. “The city went into shock for months,” says the priest.

But as the months have passed, normal daily life has gradually reasserted itself.

“People are tired of the trouble and want to get on with their lives,” says Eyob, a local tour operator. “But, then again, in a couple of years, who knows.”

Many criticise the government for failing to address long-term structural frictions between Ethiopia’s proclaimed federal constitution and its actual centralist developmental state model, as well as failing to resolve increasing ethnic tensions.

“Three years ago I went to university and no one cared where you were from,” says Haile, a telecommunication engineer in Bahir Dar. “Now Amhara and Tigray students are fighting with each other.”

“Federalism is good and bad, as Ethiopia has all these different groups proud of their languages and cultures,” says Haile’s friend Joseph, who is half Tigrayan and half Amhara. “This government has kept the country together, if they disappeared we would be like Somalia. All the opposition does is protest, protest, they can’t do anything else.”

“The government has a chance for peace but they don’t have the mental skills to achieve it,” says tourist guide Teklemariam. “They are getting old, how can they innovate? They have no mind for it.”

Ethiopia’s vertiginous topography has challenged foreign invaders for centuries. But it’s potentially a headache for domestic rulers too, added to which militarism is a traditional virtue in the Amhara region.

“I saw dozens of soldiers at Gondar’s hospital with bullet and knife wounds,” says Henok, a student nurse, who took part in the protests. “The government controls the urban but not the rural areas.”

In Gondar, young men talk admiringly of an Amhara resistance movement that for months has been attacking security forces amid the region’s mountains, cliffs and tight valleys.

“The farmers are ready to die for their land,” the Ethiopian priest says. “It’s all they have known, they have never been away from here.”

But others play down such claims.

“This has always been an area where state control has been more formal than real, and where banditry has flourished,” says René Lefort, visiting and writing about Ethiopia since the 1974 revolution that ended emperor Haile Selassie’s reign and brought in the Derg military dictatorship (which then fell to the current government in the 1991 revolution).

“If a movement of armed farmers exists, does it fall under this age-old banditry or is it linked in one way or another to more organised resistance?”

Either way, the government faces a serious challenge in winning over locals from all walks of life.

“The time of the Derg was better, they took from the rich and gave to the people,” says 65-year-old grandmother Indeshash, housebound in Gondar due to ongoing leg problems. “If my legs worked I would have protested.”