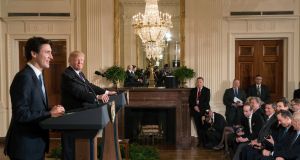 As US president Donald Trump nears his 100th day in office on Saturday, the White House confirmed it was not after all pulling out of the North American Free Trade Agreement (Nafta), a key campaign pledge of Mr Trump’s.

The announcement followed 24 hours of confusion over the status of the trade deal between the United States, Mexico and Canada, after the White House indicated it was preparing an executive order withdrawing from the deal.

But following two hastily-arranged phonecalls between Mr Trump, Canadian prime minister Justin Trudeau and Mexican president Enrique Peña Nieto late on Wednesday, the US president said he would not cancel the agreement.

“They asked me to renegotiate. I will,” Mr Trump said during a press conference with the Argentinian president, Mauricio Macri, in the White House on Thursday.

“And I think we’ll be successful in the renegotiation, which frankly would be good,” adding that it “would be simpler” than killing Nafta.

But he warned that he would still walk away from the deal if unhappy with the renegotiation.

“If I’m unable to make a fair deal ... for the United States, meaning a fair deal for our workers and our companies, I will terminate Nafta. But we’re going to give renegotiation a good strong show,” he said.

While the renegotiation “will start very soon – it’s actually starting today,” according to Mr Trump, formal talks are unlikely to begin before August as Congress must be notified 90 days in advance.

Mr Trudeau, who is due to meet with Taoiseach Enda Kenny next week in Montreal, confirmed that Mr Trump had been considering cancelling the deal.

“I highlighted quite frankly ... that a disruption like cancelling Nafta, even if it theoretically eventually might lead to better outcomes, would cause a lot of short- and medium-term pain.”

“That’s not something that either one of us would want,” Mr Trudeau added, “so we agreed that we could sit down and get to work on looking at ways to improve Nafta.”

The ambitious trade pact, which was signed by former president Bill Clinton more than 20 years ago, underpins the trading relationship between the United States and its two neighbours, eliminating virtually all tariffs between the three countries. But Mr Trump repeatedly criticised the deal during the presidential campaign, promising to revoke it if he secured office.

Tensions over Nafta rose to the surface days after the US administration slapped a 24 per cent tariff on softwood lumber imports from Canada. It has also strongly criticised Canadian controls on US dairy exports into the country.

Mr Trump is racing to pass a raft of measures before he reaches the symbolically important 100-day mark in office this weekend. He unveiled an ambitious tax-reform proposal on Wednesday.

Mr Trump, who will hold a rally in Harrisburg, Pennsylvania on Saturday night to mark passing the 100-days, is also still facing a challenge in averting a government shutdown at the end of the week, with Congress due to pass a number of budget measures by midnight on Friday.

Mr Trump appeared to blame Democrats for a possible shutdown on Thursday, tweeting: “Democrats want to shut down the government. Politics!”

Tensions have emerged over healthcare, with Democrats threatening to withhold support for top-gap funding measures if there is a further attempt by Republicans to present a new healthcare bill.