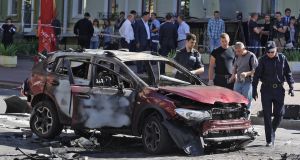 Ukraine’s SBU security service has denied that one of its agents was monitoring investigative journalist Pavel Sheremet last July, when the bomb that would kill him was placed under his car.

A team of Ukrainian journalists investigating the case – which has not resulted in any arrests – discovered CCTV footage that showed a Skoda and a Mercedes parking near Mr Sheremet’s Kiev apartment at about midnight on the night before the murder.

The cars left together about three hours later, shortly after the man and woman who are suspected of planting the bomb walked past them and away.

With help from a member of the Bellingcat investigative group, the journalists identified the Skoda’s number plate and tracked it to a man called Igor Ustimenko in the Black Sea port of Odessa. He admitted to being there on the night in question, but insisted he had no connection with Mr Sheremet’s death.

An unidentified government source told the reporters that, as of 2014, Mr Ustimenko worked for the SBU. Before Mr Sheremet’s murder, his colleagues at the Ukrainska Pravda news service – which often investigates powerful officials and businessmen – suspected they were under SBU surveillance.

Interior minister Arsen Avakov said: “Putting emotion to one side, many facts in this investigation interest us – and we will summon its creators and Igor Ustimenko for questioning.”

Serhiy Knyazev, Ukraine’s police chief, said he would urgently gather all investigators working on Mr Sheremet’s murder to “connect the journalists’ film with material from the criminal case and check the information contained there.”

The reporters also found security camera footage that seems to show the two people suspected of planting the bomb returning the next morning to Mr Sheremet’s street, apparently to activate the device as he left for work.

As Mr Sheremet set off for his morning radio show, his car exploded and burst into flames.

Ukrainian president Petro Poroshenko and top government, police and SBU officials vowed to catch his killers, amid widespread criticism that Ukraine’s 2014 pro-western revolution has failed to end gangsterism and corruption at all levels.

Mr Sheremet was born in Belarus and came under pressure for criticising its veteran authoritarian leader, Alexander Lukashenko. In 1999 he moved to Russia but quit the state broadcaster in 2014 over what he saw as its propaganda campaign against Ukraine.

Having denounced Russia’s annexation of Crimea and backing for separatists in eastern Ukraine, Mr Sheremet moved to Kiev. He was a friend of Russian opposition leader Boris Nemtsov, who was shot dead near Moscow’s Kremlin in 2015.