Zappone critical of HSE failings on mother and baby homes 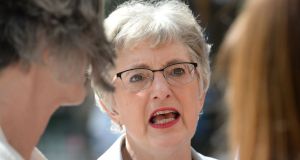 Minister for Children Katherine Zappone said it was “not good” that the call for an inquiry by senior HSE staff five years ago were not heeded. Photograph: Dara Mac Dónaill

It was a “pity” the HSE did not fully investigate mother-and-baby homes in 2012 when senior staff warned about probable “criminal” activities in two of them from the 1920s, Minister for Children Katherine Zappone has said.

She said it was “not good”that the call for an inquiry by senior HSE staff five years ago was not heeded. The staff had called for “a fully fledged, fully resourced forensic investigation and State inquiry” into the *mother-and-baby homes at Tuam, Co Galway and Bessboro, Co Cork.

A Commission of Investigation into Mother and Baby Homes was established in February 2015. This was in response to public outcry at the findings of historian Catherine Corless that up to 800 infants’ bodies may have been buried in a septic tank at the Tuam home.

However, HSE documents from October 2012 marked “strictly confidential” show social workers were warning of the “possibility that illegal actions took place” in the Cork and Tuam homes from the 1920s.

He outlines findings by investigating social workers in the south and west who had been preparing documents for the forthcoming report from an interdepartmental committee into Magdalene laundries. The social workers looked at referral pathways to and from mother-and-baby homes.

He refers to “protracted detainment” of women in the homes, “in some cases against their expressed will”; the possible trafficking of women between institutions; the fact that institutions were being paid for the upkeep of women who had left, and “infant mortality rates in the homes in 1950” which were “equivalent to [rates] in Ireland in the 1700s”.

“This may prove to be a scandal that dwarfs other, more recent issues with the church and State because of the very emotive sensitivities around adoption of babies, with or without the will of the mother,” warns Dr McKeown.

According to the minutes of a conference call between Dr De La Harpe, Mr Garland and Dr McKeown in October 2012, it was agreed that Dr McKeown would “draft an early-warning one- to two-pager” for the HSE’s national director of quality improvement, Philip Crowley, “suggesting that this goes all the way up to the Minister”. The minister for health at the time was James Reilly.

“A concern is that, if there is evidence of trafficking of babies, that it must have been facilitated by doctors, social workers, etc, and a number of these health professionals may still be working in the system. It is important to send this up to the Minister as soon as possible with a view to an interdepartmental committee and a fully-fledged, fully resourced forensic investigation and State inquiry.”

In October 2016, Mr Crowley wrote to a mother-and-baby home survivor saying because the 2012 material did not relate to the Magdalene inquiry, it was given to the director designate of Tusla. This was Gordon Jeyes who became the first chief executive of Tusla when it was established in 2014.

Mr Jeyes has told The Irish Times that while the files may have been transferred to Tusla upon its creation, the decision on whether to investigate their contents was one for HSE in 2012. This was not something Tusla had the forensic capabilities or resources for, he said. “The buck did not stop with me, or Tusla.”

A spokeswoman for the HSE said the 2012 report was “not brought to Minister’s attention at that time”.