Personal records a priority for mother and baby home survivors 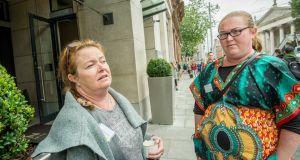 Catherine Coffey O’Brien and Terri Newman, both from Mayfield Cork, at the Mother and Baby Homes commisission of investigation conference. Photograph: Brenda Fitzsimons

The “most important” thing for survivors of mother and baby homes is getting all their personal information, according to many of those attending the first of a series of consultation meetings with Minister for Children Katherine Zappone.

Speaking to The Irish Times after the meeting in Dublin on Friday, survivors said they wanted redress, counselling, more information about the ongoing Commission of Inquiry into the homes and the recording of a “collective history” of their experiences.

Almost all, however, said “the biggest thing” was accessing the records of their time in institutions, as well as to those of their mothers and siblings, and their own medical records.

Ms Zappone hosted the event in Dublin city centre which was attended by 120 survivors and family members. It was oversubscribed and more events are planned around the country.

Ms Zappone explained she had invited survivors, to hear what they needed and wanted, following publication of the second interim report from Judge Yvonne Murphy, chair of the Commission of Investigation into Mother and Baby Homes. In February Justice Murphy recommended that survivors should have redress, though this is been opposed by Government.

Given that the final report would not be published until February 2018, Ms Zappone wanted to consult with survivors. She would bring her findings from consultations to Cabinet in October, she said.

“I want to respond as quickly as possible in order to put something in place to support people,” she said.

Among those at Friday’s consultation was Catherine Coffey-O’Brien, (46) from Mayfield, Cork, who was born in a mother and baby home, and grew up in and out of industrial schools in Tralee and Killarney. A Traveller, she was subsequently in Bessboro mother and baby home when she became pregnant and believes her ethnicity made her and her family particularly vulnerable to being placed in institutions.

Tony Kelly (71), who who was born in St Theresa’s mother and baby home in Blackrock, Co Dublin, and was in nine foster homes, questioned why the consultations were taking place at all while Ms Justice Murphy’s inquiry was ongoing. “What we want is full transparency and accountability,” he said.