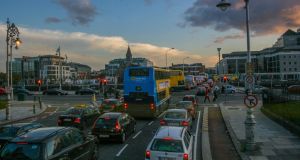 Lower levels of traffic on roads, as a result of Covid-19 restrictions, have led to a halving of emissions of the pollutant nitrogen dioxide in Ireland, according to a new report on pollution and energy consumption from the MaREI at University College Cork.

The analysis shows that Covid-19 restrictions have led to a dramatic reduction in carbon emissions and air pollution in Ireland, and prompted a major shift in energy consumption. However, the report shows that air pollution from the burning of solid fuels has not reduced.

Ireland is on course to reduce its carbon emissions, including those by the aviation sector, by up to 3 million tonnes this year.

Energy used for transport accounts for about 40 per cent of Ireland’s energy consumption and 20 per cent of emissions.

For every week of lockdown, Irish people will, on average, “reclaim five hours that would have otherwise been spent stuck in their car”.

Nine out of 10 flights have been cancelled, and if this continues, it will amount for the same amount of CO2 saved as if Moneypoint coal-fired power station in Co Clare was switched off for six months, according to the research. This would save one million tonnes of CO2 annually.

The research focussed on the pandemic’s impact on Ireland’s energy system and associated greenhouse gas emissions and air pollution in transport, heat, and electricity.

Emissions from private cars are nearly twice the amount for flights, the study notes.

Travelling to work and school accounts for over a third of the journeys taken by Irish people each year. Each week “the school run requires Irish parents to drive a staggering 7 million km – emitting an estimated 1,200 tonnes of CO2 emissions; equivalent to the annual driving of about 400 cars”.

The average commuter spends 28.2 minutes driving to work, “roughly one hour per day there and back. That means for every week we are in lockdown people will reclaim 5 hours that would have otherwise been spent stuck in their car”, notes the study.

Private car activity levels have dropped by more than 85 per cent since lockdown. Based on 12 weeks of restrictions and another 12 weeks with partial measures, there could be a reduction of 1.5 million tonnes of CO2.

New car sales in March were 33 per cent lower than March 2019 and in April car sales were down by 90 per cent compared to April 2019. Sales of new electric vehicles briefly bucked the downward trend in March when they increased by 41 per cent.

Flights are responsible for 3.3 million tonnes of emissions annually.

Nearly nine out of 10 flights have been cancelled; the remainder are flying with low occupancy or to carry goods.

Assuming flight restrictions last for 12 weeks, and there will be another 12 weeks with partial recovery, this could result in a reduction of 1 million tonnes of heat-trapping CO2 this year.

Given difficulties airlines are likely to face with continued social distancing impacting upon tourism, the final annual reduction in emissions from aviation “may be considerably higher”.

Of all rail energy service demand in Ireland, 90 per cent is met by oil; the remaining by electricity.

DART and Intercity services are operating at 45 to 65 per cent of normal levels. Providing a 12-week scenario for a restricted schedule, operating at 55 per cent service, a reduction of 22,000 tonnes of CO2 may be realised.

Ireland’s housing stock uses a lot of oil and gas for heating, as well as solid fuels such as peat, coal and timber.

Heat demand has dropped in the travel, leisure, office and education sectors. The largest drop in gas demand is the construction sector; a drop equivalent to 25 per cent of all gas central-heated houses. However, he construction sector has picked up heat consumption in producing materials recently in anticipation of restarting works.

Education- and office-sector gas consumption has not dropped to zero as buildings are at low-occupancy levels, while combined heat and power plants consume the majority of gas demand.

During this time of significant remote working, electricity has become our primary source of energy “aiding in executing office work, lighting and entertainment”.

Electricity demand decreased by 5 to 10 per cent over seasonal expectations since early March.

Sources for electricity supply include fossil fuels (gas, coal, oil and peat); renewables (wind, solar, biogas and hydro), and electricity imported from Britain. The fuel mix used depends on the weather, how much electricity is available from renewable sources, as well as at what price other producers are willing to generate electricity.

European Environment Agency data confirm concentrations of nitrogen dioxide (NO2) – a pollutant emitted by road transport and electricity generation – have decreased in many European cities.

In Ireland, there has been a halving of NO2 concentrations at many monitoring stations.

By exploring the impacts restrictions were having on Ireland’s pollution levels, they were seeking to understand feasible longer-term actions to mitigate climate change, he added.

Ultimately, what will matter is how we go back to business when life returns to normal. To make the big shifts in our energy system that are needed, people need to have money in their pocket and politicians need to go back to putting legally binding equitable carbon budget emissions limits into law as soon as possible, the MaREI analysis concludes.

“A complete lockdown scenario is only viable for short term, whereas climate change mitigation and adaptation is a marathon event requiring rapid and sustained steady changes in how we consume energy and live our lives,” it points out.