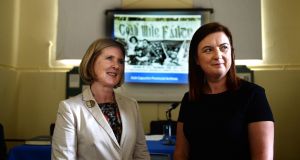 Gender quotas should be introduced next year for the local elections, the National Women’s Council of Ireland (NWCI) has said.

Just 21 per cent of local councillors are women and it would take another 200 years to achieve gender parity at the current rate, NWCI director Orla O’Connor told the Parnell Summer School in Avondale, Co Wicklow.

Speaking on the theme of ‘A Century of Women in Irish public life, 1918-2018’, she pointed out that in 1999, 16 per cent of councillors elected were women and that percentage had increased only marginally in the intervening years. It was also at 19 per cent in 2009 and only increased to 21 per cent seven years later.

Ms O’Connor said “quotas work” and it was necessary to move beyond “soft measures” to ensure that women are fairly represented in society.

Labour Senator Ivana Bacik also lent her support to quotas at local election level saying the introduction of legislation in 2012 in relation to gender selection at general elections had increased the representation of women in the last Dáil from 15 per cent to 22 per cent.

At least 30 per cent of all general election candidates have to be women or parties face losing public funding.

She said it was important that quotas be extended to local elections as local authorities were the “gatekeeper” for candidates who would eventually stand in the general election.

Prof Yvonne Galligan told the summer school that the 30 per cent threshold should be considered a minimum for women candidates in general elections.

She feared the “30 per cent that was aimed for becomes the cap. It doesn’t become the bottom, it becomes the top”.

She said Ireland was only 81st in the world in relation to female representation in parliament.

Prof Galligan said she shared the frustration of Minister for Culture Josepha Madigan about the pace of change in relation to female representation in parliament.

At the opening of the summer school, Ms Madigan said political parties may need to introduce gender parity in selecting election candidates if they do not reach that target naturally.

Ms Madigan said she was in favour of higher gender quotas than the minimum 30 per cent figure brought in by the Government for political parties in the State. Parties that fail to reach that threshold receive less State funding.

She also said the timeframe to reach a 40 per cent threshold by 2023 should be speeded up.

She said political parties should aim for a 50:50 split in terms of candidate selection naturally, but if that does not happen “serious consideration” should be given to increasing the existing quota threshold from 30 to 50 per cent.