Diarmuid Martin: ‘Not informed of any such interventions at that time by either side’ 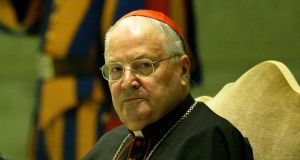 Archbishop of Dublin Diarmuid Martin has said he has no further information on contacts between the Vatican and then president Mary McAleese and then minister for foreign affairs Dermot Ahern in the early 2000s.

He was responding to reports in The Irish Times last week that Ms McAleese refused to discuss a suggestion by then Vatican secretary of state Cardinal Angelo Sodano in November 2003 of an agreement with Ireland that it would not access church documents.

Meanwhile, Mr Ahern said Cardinal Sodano, in private discussion with him at the Vatican in November 2004, suggested Ireland might indemnify the Catholic Church against legal actions for compensation by clerical child sexual-abuse survivors.

Archbishop Martin attended a conference with Mr Ahern at the Irish College in Rome on November 12th, 2004, the same day the former minister had met Cardinal Sodano.

Archbishop Martin said in a statement he “was not informed of any such interventions at that time by either side”.

In his statement, Archbishop Martin said he believed the media “reports highlight the importance of maintaining open transparent dialogue between Church and State and respect for important legislation in this area such as Freedom of Information and lobbying legislation”.

He reiterated “that Church State dialogue should accord true recognition by each and delineate the rights of each”, within what he describes as a “co-operative regime of separation between Church and State”.

Where access to Church documents was concerned, the statement said “the Murphy Commission noted in its final report that it had access to more than 100,000 documents to assist in its investigation – around 80,000 of which were made available to it” by Archbishop Martin.

The Murphy Commission looked at the handling of clerical child sexual-abuse allegations in the Dublin archdiocese.

Ms McAleese said last week she was on a state visit to Italy when the topic of church documents came up in a courtesy call to the Vatican.

Describing it as as “one of the most devastating moments in my presidency” she said of the Cardinal’s proposal: “It was very clear it was because he wanted to protect Vatican and diocesan archives. I have to say that I immediately said the conversation had to stop.”

Mr Ahern said of Cardinal Sodano: “He wanted to know whether the Irish government would indemnify the Vatican against any similar claims in Ireland. He was as blunt as that.” Mr Ahern said. “On no account could I give such an undertaking” and “I was very annoyed,” he said.

Mr Ahern was in Rome to meet Pope John Paul as part of events to mark 75 years of diplomatic relations between Ireland and the Holy See.

Separately, the Vatican press office has told The Irish Times that Cardinal Kevin Farrell, who has overall responsibility for the World Meeting of Families taking place in Dublin later this month, would not be commenting “before or during” the upcoming events on reports in the US that he, as a member of the controversial Legionaries of Christ, was closer to its disgraced founder Fr Marcial Maciel than previously maintained.

Fr Maciel, who died in 2008, was exposed as a serial sex abuser of boys and young men and the father of six children by multiple women. He was removed from ministry by Pope Benedict in 2006.

When asked in 2016 what he had known about Fr Maciel’s activities as a sexual predator, Cardinal Farrell, who left the Legionaries of Christ in 1981, said: “I never knew anything back then.”