Ivana Bacik says #MeToo helped women like her speak out 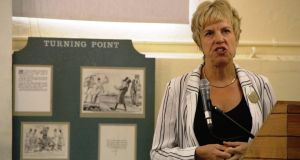 Labour Senator Ivana Bacik has said sexual harassment is “absolutely pervasive” in the workplace and she experienced it herself.

Ms Bacik told the Parnell Summer School in Co Wicklow that she was sexually harassed as a waitress working in London as a student.

“All of us knew a particular manager not to go near. I was working at the lowest level in a pizza place in the Charing Cross Road,” she said.

“It’s so pervasive for younger women and particularly women in less powerful roles in workplaces. The more powerful you are in the workplace, the less likely you are to be harassed.”

Speaking on the topic of ‘A Century of Women in Irish public life, 1918-2018’, Ms Bacik referenced a study in 2003 which was carried out in the legal profession in Ireland in which one in seven women lawyers said they had been sexually harassed.

She also came across cases of sexual harassment while working as a labour lawyer before entering politics.

In her presentation to the Parnell Summer School, Prof Yvonne Galligan from Queen’s University Belfast said the #MeToo movement had much in common with the suffrage movement of 100 years ago.

She described it as a “very significant political movement” which originally began as a social media movement.

She believed credit for it must go to its originator Tarana Burke, the African-American woman who coined the phrase #MeToo in 2006 and then to the actor Alyssa Milano whose use of the phrase helped to bring down the producer Harvey Weinstein last year.

The #MeToo movement has brought about changes in the law in countries including Canada, France and Morocco.

She suggested that it was not just a women’s issue, but that men should be involved too.

“This is not just going to go away. The critical thing is that we tackle it together. This is a political issue for women and men who support, respect and honour the women in their lives. It is up to men too to say enough is enough and time’s out.”