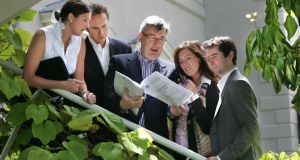 The US State Department’s prolific communications department is proof of the influence that the United States aims to have on world affairs. It issues a huge volume of comments every week on everything from the latest tragedy in a corner of the world to the significance of a particular country on its national day. The communiqués are as much for immigrants from the 190 countries who have people living in the United States as for those still at home.

The State Department is also seeking to create a new form of statesmanship for the 21st century, identified by the last secretary of state, Hillary Clinton, by appealing to the many diasporas within the country’s borders to send important messages home.

The Global Diaspora Forum being held this week in Dún Laoghaire and Washington DC, starting today, aims to look at how diasporas can make their engagements with their “countries of origin or ancestry effective and sustainable”. The role of Irish America in Irish affairs could serve as an effective template, while the achievements of the White House in the Northern Irish peace process during Bill Clinton’s time points to how a political process and diaspora can work in tandem to fulfil a challenging foreign policy goal.

The Irish-American community played a critical role in the peace process in Northern Ireland, though its involvement started with a handful of influencers in a peace initiative led by journalist Niall O’Dowd and businessmen Chuck Feeney and Bill Flynn. The backroom manoeuvres of the three men, with help from others, brought Teddy Kennedy, the Irish-American Democratic veteran of the Senate, on board. He successfully pushed the Clinton administration to issue a visa for Sinn Féin leader Gerry Adams that allowed him to sell ceasefire talks to Irish Americans in face-to-face meetings in 1994.

His visit, which was strongly opposed by Britain, helped to move Irish American support from filling boxes with cash for Provisional IRA guns in the bars of New York and Boston in the 1970s to a wider movement within Irish America seeking an end to violence in the 1990s.

The influence of Irish American political figures within that diaspora was very significant. In 1992 the Irish-American mayor of Boston, Raymond Flynn, asked the Democratic presidential candidate Bill Clinton a question before that year’s presidential election at a forum on Irish issues attended by many Irish Americans: would he appoint a peace envoy to Northern Ireland if elected president? Clinton said he would.

The White House was walking a tightrope with the UK on Northern Ireland. But in 2006 Mitchell was appointed co-chairman of the all-party peace talks in Northern Ireland by the British and Irish governments, reflecting the value of Clinton’s appointment and the promise he kept.


Pressure
Just as pressure from President Reagan, at the urging of legendary Irish-American congressman Tip O’Neill, had been a factor in pushing Margaret Thatcher towards signing the Anglo-Irish Agreement in 1985, President Clinton’s influence, at the encouragement of Irish Americans, helped the nascent Northern Irish peace process in and changed the stereotypical image of Irish Americans from gunrunners and fundraisers into peace mediators.

Irish Americans could, in turn, point to the value of Clinton’s diplomatic victories over the British and the backing of the White House to steer the Provisional IRA and its supporters in the direction of peace.

The lasting influence of the Irish diaspora on American politics is best seen every St Patrick’s Day when the Taoiseach spends about five hours with the US president on one of only two days in Washington’s political calendar when the president travels to Capitol Hill for the speaker’s lunch.

“It is totally remarkable. Although we treasure it, I am sure that successive White House staffs would love to get rid of it because they are hounded by every other ethnicity,” said Loretta Brennan Glucksman, an influential figure in the Irish-American community. “That goes back to that ephemeral but very identifiable pull that the Irish have in America and not just with Irish America but with Americans in general.”


Rallying cause
About 40 million Americans claim Irish ancestry, making the US home to the largest contingent of the Irish diaspora. A growing number – about 8,000 Irish people emigrated to the US last year – grew up after the 1998 Good Friday Agreement.

Unlike the Jewish community, to whom the term “diaspora” belongs, it is a more amorphous group. So with Northern Ireland largely off the radar, Irish Americans need a cause to rally around.

“It is important to find key priorities that will pull the diaspora together,” said Kieran McLoughlin, the chief executive of the philanthropic group, the American Ireland Fund, a fundraising powerhouse.

“The need for reconciliation and peace in Northern Ireland in the 1980s and 1990s certainly achieved that. Now it is the economic recovery of the Republic that is concerning Irish Americans. It has moved from being a political priority to an economic and social priority.”

The make-up of the diaspora is also changing. McLoughlin says many younger Irish Americans are more integrated into US society, making it more difficult to attract new generations to the cause.

“We have to work hard to maintain their affinity to Ireland,” he said.

The Irish are held up as an example of how to make the most of a diaspora. McLoughlin said the American Ireland Fund had been asked to advise Greek figures who set up the Hellenic Initiative to mobilise support among their diaspora to aid Greece’s economy recovery. The Irish diaspora has also been looked at as a guide for the Indian American Foundation, said McLoughlin.

Glucksman said the Irish example was a “great template” for the State Department to use with other diasporas but warned that there was a tipping point to avoid. “You can be on it before you are aware of it unless you are very conscious of not being patronising or condescending,” she said. “You have to be really sensitised to it.”


Critics
Others are also critical of how the Irish diaspora has been tapped for advice at events such as the Global Irish Economic Forum held at Farmleigh in Dublin and the Global Irish Network, saying little of value has materialised from these events.

“Money and time is wasted on conferences and reports that I find to be little more than smoke and mirrors, and mini-industries for some people,” said Trina Vargo, president of the US-Ireland Alliance.

The alliance establishes deeper roots between Ireland and the US with the Mitchell Scholarship programme, named after the Maine senator who played a crucial role in the peace process.

Every year high-achieving American students travel to Ireland and Northern Ireland for a year of postgraduate study. “What substantial has come of them?” said Vargo of the various conferences held to attract support from the diaspora.

“These things are meant to give the impression of something being done when in reality matters are just kicked down the road.”