We felt so alone, says woman whose baby had a fatal foetal abnormality

Couple felt they had no option but to travel to Liverpool to have her longed-for daughter Grace induced, Sligo meeting told 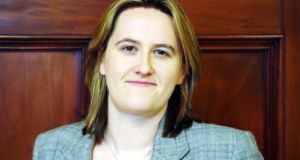 Fiona De Londras, Professor of Global Legal Studies at the University of Birmingham said Ireland was one of a only a handful of countries in the world to regulate abortion in its constitution.

Tracey Smith says she’ll never forget the plane journey to Liverpool on St Patrick’s Day 2014, four weeks after she discovered that the baby she was carrying had a fatal foetal abnormality.

“We went Ryanair from Knock – you can imagine the revellers,” she says recalling the journey and the loneliness she and her husband Kieran felt.

It was her fourth baby and the couple had been devastated to discover at 20 weeks that the baby had a fatal condition Thanatorphic dyslplaxia.

“We went to Holles Street [hospital] and they confirmed it was fatal,” she recalled. She said she had packed a bag before heading to the hospital “naively thinking I was going to be induced”. Instead she was told that all doctors could do was monitor her.

Eventually she rang Liverpool Women’s Hospital. The couple felt they had no option but to travel there to have her longed-for daughter Grace induced.

“It took four weeks. We couldn’t get an appointment quickly because there were so many Irish couples going,” said the 36-year-old who had another baby Callum a year later.

The Co Mayo woman was one of the guest speakers on Thursday night at the Sligo launch of Together for Yes, the national campaign advocating the removal of the Eighth Amendment.

She told the packed meeting that she was there because she wanted people to realise that it is “not a black and white issue”. She said she started campaigning a year ago on the third anniversary of her tragedy. “I feel people are now being punished in Ireland for a tragedy”.

“It was such a horrible experience,” she says of the three days spent in Liverpool. “We felt so alone. We did not realise so many other couples have to do this. And yes we did feel abandoned.”

Not being able to bring her baby home with her compounded the pain. “The ashes were delivered by courier to me at home. I had to wait three weeks. At least the hospital gave me a tracking number so I wouldn’t get a shock when the knock came to the door. Obviously the delivery man had no idea what he was giving me”.

She told the gathering that “this is what the Eighth Amendment is doing to wives and daughters”.

Fiona de Londras, professor of Global Legal Studies at the University of Birmingham said Ireland was one of a only a handful of countries in the world to regulate abortion in its constitution. “The Constitution is not an appropriate place to regulate healthcare,” she said.

The academic said the Eighth Amendment was making it impossible for doctors to practise medicine with compassion. “We cannot provide health care in the shadow of a criminal sanction” she told the meeting.

Local activist Lorri Kelly said that according to the statistics in 2016 at least 151 women from the north west including 29 from Sligo, had travelled to the UK for an abortion. In 2016, at least 151 from the northwest and 29 women from Sligo travelled to the UK for an abortion “Over the past three decades we have witnessed the harm that the Eighth Amendment has done to women in Ireland”, she said.