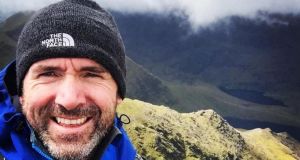 Séamus Lawless is said to have slipped while in the “Balcony area” near the summit of Everest after reaching it early on Thursday.

The parents and other family members of the Irish man Séamus (Shay) Lawless, who has been missing on Mount Everest for the past few days, attended a candlelit vigil in Dublin last night.

Organised by Trinity College, where Mr Lawless (39) works as a professor in the Artificial Intelligence discipline in the School of Computer Science and Statistics, the solemn event saw many of his colleagues, students and friends gather with his family to remember him and support each other.

From Bray, Co Wicklow, the father of one was part of an eight-member climbing expedition when he went missing after he reportedly fell from an altitude of 8,300 metres.

He is said to have slipped while in the “Balcony area” near the summit of Everest after reaching it early on Thursday.

In a statement on Saturday morning Trinity College said it is thinking of him at this time and had arranged a vigil for the Trinity Long Room Hub on Saturday evening.

“I want Shay to know we are with him in spirit tonight,” she said before encouraging those gathered to sing a few songs together “because Shay loves a good singsong”.

They began with Wild Mountain Thyme and many wiped away tears before proceeded outdoors to Front Square to join in The Auld Triangle, followed by what was referred to as one of Shay’s favourites Raglan Road.

Their candles were an attempt to defy the darkness and bring light at a difficult time, Prof Ohlmeyer said.

Meanwhile the family of Mr Lawless have set upa fundraising page to cover the “substantial costs” to bring him home.

The company that organised the climb said the search has become a recovery operation.

His family aim to raise €750,000 to cover costs associated with finding him and bringing him home to Ireland. On Saturday night more than €198,000 had been pledged.

A post on the page reads: “With the weekend upon us, we, the family of Shay, have been left with no other option but to ask for assistance in raising funds to gather a team of expert Sherpas to locate and bring our beloved Shay home to Ireland. Time is of the essence in the search mission and the costs of running this mission are substantial.

“At this moment in time we have little to no information about what happened on Thursday 16th May, nor do we know the current location of Shay. It is our priority to locate him and bring him home and we appreciate all the support that can be offered as we face this hugely challenging situation,” his family said.