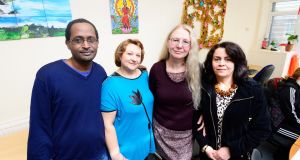 Two centres in west Dublin delivering support services to migrants for over a decade face closure at the end of May after funding was stopped by the Department of Justice.

The Clondalkin and Tallaght intercultural centres provide English and literacy classes, women’s support groups, integration projects and advice to migrants. Operating in areas with high concentration of migrants, they are described as “essential, not a luxury”.

Local Sinn Féin TD Eoin Ó Broin is meeting Minister of State for Equality David Stanton on Thursday in an effort to have funding restored.

The centres’ main funding – about €40,000 each – has come from the Department of Justice through South Dublin County Council, which has granted it under the South Dublin County Partnership (SDCP). The partnership has also supported the centres with funds from the Social Inclusion Community Activation Programme administered by Pobal.

Last year the department introduced a new “competitive tendering process” where organisations have to to apply to a €1.8 million National Integration Funding Programme (NIFP). Funding was allocated to 14 projects out of over 70 applications to 2020. The SDCP was not among the 14.

The Clondalkin centre, open since 2008, is across the road from direct-provision centre which houses over 200 immigrants.

The Tallaght centre, open since 2003, had over 4,000 contacts with immigrants last year.

Classes and groups are delivered by volunteers, and there are two salaried positions – the centres’ managers.

The likely loss of the “unique and necessary services, run on a shoestring” is causing “huge upset and devastation”, says Lyuba Moore, manager of the Clondalkin centre. “There is nothing else like these in our communities. We are more than a practical service – we are family, we are best friends.”

Iyasu Gerbermichael from Ethiopia was referred to the Clondalkin centre by the Department of Social Protection for English classes. He smiles warmly describing the classes “and the help and the welcome”.

Asked his feelings about the probable closure, his face falls. “It will be a terrible thing.”

Lynn Broderick, secretary of the Tallaght centre’s steering committee, described as “awful” both that the centres faced closing and the manner in which the “poor now have to compete with the poor for scraps”.

A spokesman for the Department of Justice said: “In 2017 an open, fair and transparent selection process was conducted to allocate funding under the NIFP. All eligible applications received were assessed by Office for the Promotion of Migrant Integration against the published selection criteria.

“South Dublin County Partnership [SDCP] applied for funding within this process...but unfortunately was unsuccessful in what was a highly competitive process with over 70 eligible applications submitted from around the country.

“SDCP is, of course, eligible to apply under all integration funding programmes which will be advertised on the department website, the OPMI, and the EU Funds Unit.”

Local councillor, Kieran Mahon (Solidarity) said the community was “shocked” by the pending closures. He called on Mr Stanton “to ensure continuity of services at Tallaght and Clondalkin by reinstating the €80,000 funding”.