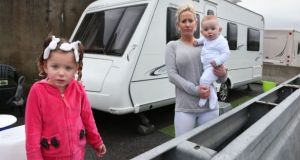 Eileen Cleary with her daughter Leona (3) and nine-month-old son Ricko: The family, along with 10 others, has been given until at least Tuesday evening to vacate the site. Photograph: Joe O’Shaughnessy.

Traveller families with 15 young children who were facing eviction from an unauthorised site in Galway have been given a temporary reprieve, following intervention by Fianna Fáil TD Éamon Ó Cuív.

Mr Ó Cuív said he had received an assurance from the owner of the waste facility where the Travellers’ caravans are parked that they could stay until Tuesday evening.

Galway Traveller Movement, which welcomed the development, said it was hoping the Galway city manager would address the issue on his return from leave on Monday.

The families, who have been camped at the entrance to Barna Recycling on the Headford Road for the past six months, had been issued earlier this week with a legal request to vacate the site by midday Friday.

The families had been in private rented accommodation, but were forced to move when the properties were required for sale, according to the Galway Traveller Movement.

The young parents have 15 children, aged between 11 weeks and nine years, and four have special needs.

In a statement, Galway City Council said that an “unauthorised encampment of caravans has been located on private property at Carrowbrowne, Co Galway in the Galway County Council administrative area”.

“Following notification from the land owner, by way of solicitor’s letter, requesting that they vacate the site, a number of families presented to register for homeless services at the housing department of Galway City Council on January 21st,” it said.

Families were “individually assessed for homeless services and were notified yesterday afternoon of the most appropriate immediate options available to them in each case”.

“The range of options included self-funding their own accommodation with access to COPE day centre services, the emergency homeless services of the Osterley Lodge and Fairgreen Hostel,”the statement said.

“ These options were outlined with a view to availing of the standard housing supports in the medium-term. These services were not availed of by all of the families concerned.”

It said a formal report on the current Traveller accommodation plan 2014-18 for the city would be considered at the city council’s February meeting.

Traveller John Cleary, father of four young children aged between nine months and nine years, said that he had been on the Galway city council housing list for the past ten years.

He said he had been offered several places to live, but felt they were not safe for rearing young children and had turned them down. He said that all of his children were sick, due to the conditions in which they have been living.

Mr Cleary, who said he could not work as he has a disability, was born in Ballybane, Galway.

“I don’t want a halting site and I don’t want traveller-specific accommodation,” Mr Cleary said. “All I want is a house in a quiet estate to rear my kids, and the loan of a yard to put a caravan in for now.”

Galway Traveller Movement project co-ordinator Margaret O’Riada said it was symptomatic of a wider issue relating to the housing crisis, and to a failure by local authorities to reach targets on Traveller accommodation plans.

She pointed out that four of the 15 children concerned had special needs, with two having to attend the National Children’s Hospital in Crumlin, Dublin regularly.

“Homelessness is bad enough but to degrade homeless parents and children by using forced evictions is inhumane and unnecessary,”she said.

She also called for an interagency high level task group to be set up in Galway city to deal with what she described as the “lack of equality outcomes for the Traveller community in the area of meeting their housing/accommodation needs”.

She acknowledged that there was a health and safety issue in having families with young children located next to a waste facility, but said that forced eviction should not be the route taken.

The city council is already under pressure to provide extra facilities for Travellers, following a High Court case of 2010 and the expiration of planning permission at a temporary site next to the permanent site, known as the “transient” site, at Carrowbrowne.

Some 20 Traveller families live at the “transient” site and another 13 families at the “temporary site” - both located in a former landfill area next to the waste facility on the Headford road.

Galway City Council’s housing list is currently at 4,600 applications, with another 400 applications with Galway County Council seeking accommodation in the city.