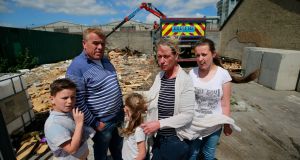 Members of the Connors family Ann, Michael, son Tommy (11) and daughters Alicia (6) and Chelsea (16) look on as the site is cleared by council staff and contractors. Photograph: Nick Bradshaw

A Traveller family say their home and many of their belongings have been destroyed by Dublin City Council without their consent.

Ann and Michael Connors, of Labre Park Traveller housing site in Ballyfermot, said they had been in a mediation meeting on Thursday morning about leaving the site when they got a phone call telling them their home was being “smashed up”.

The 47ft mobile home had housed the couple and four of their children, aged six to 16 years, since 2011.

Mr Connors, who has lived at Labre Park all his life, explained that the family had moved out in January due to a dispute with another family on site, but had kept most of their belongings there. They continued paying €75 a week rent to the council for the bay, an outhouse and utilities.

“We’ve been in homeless accommodation since after Christmas. The plan was either come back or leave and get somewhere else.

“We had a meeting on Thursday morning with Lorraine [McMahon, co-ordinator of Ballyfermot Traveller Action Project] to decide. We agreed we’d leave the site all right, and were deciding how we’d move the mobile home and where we’d put things in storage.”

Ms McMahon confirmed she was mediating between the family and the council and had been in touch with officials mid-morning on Thursday about their likely surrender of the bay.

“We drove down to the site immediately, arrived to see the home being smashed up,” said Ms McMahon. “The council knew there was a live discussion under way. Their action ... has to be in breach of the family’s human rights.”

Shortly before 1pm, most of the van had been removed, with just the base and chassis remaining. The bay was strewn with family belongings, including soft-toys, bed linen, DVDs, shoes, books and a rug.

Ann, her face and eyes red from crying, said among her belongings destroyed were wedding albums, wedding delph, photographs belonging to her father, bedding and curtains.

“That was my home,” she said as a JCB removed the last remnants of the van’s chassis from the site.

Tommy Connors (11), along with his siblings, witnessed their home being destroyed. “I had an Xbox,” he said.

A spokesman for the council said: “The Traveller Accommodation Unit has asked the family on numerous occasions to remove their belongings from the site, as the bay needs to be locked up and secured for the health and safety of other residents on the site”.

The council did not comment on the destruction of the caravan but said “the council has offered to place the property [their belongings] into storage for the next two weeks and our contractors have since arrived on site, photographed the unit and all the property. The property has been placed into storage.”

Local TD Bríd Smith of People Before Profit is seeking an “urgent meeting” with Minister for Housing Eoghan Murphy about the incident.

“A family’s caravan was demolished in front of their children with many of their possessions still inside.

“Witnesses to the attack are aghast that any official, acting on behalf of the State, or in an official capacity, could have organised such an act.”