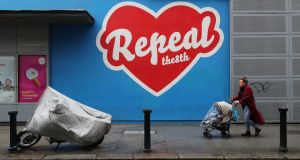 A mural featuring a red heart on a blue background, with “Repeal the 8th” written across it, outside the Project Arts Centre in Dublin. File photograph: Niall Carson/PA Wire

Dublin’s Project Arts Centre has been told to remove a Repeal the 8th mural outside its premises.

A similar episode had occurred in 2016 regarding an almost identical mural.

The new work, which features a red heart on a blue background, with “Repeal the 8th” written across it, is by Irish street artist Maser.

In a statement on Friday evening, the Project said it had been told by the Charities Regulator that the mural put it in breach of the 2009 Charities Act, as it was political.

“The Charities Regulator has informed Project Arts Centre that the display of Maser’s ‘Repeal the 8th’ artwork is ‘political activity’ and that Project is therefore in breach of the Charities Act 2009 and not in line with Project’s ‘charitable purpose’. Should the artwork not be removed, Project risks losing its charitable status.

“Project Arts Centre respects the authority of the Charities Regulator and will comply with their order to remove Maser’s artwork.”

The mural will be painted over by the Project’s artistic director, Cian O’Brien, at 11am on Monday, said the statement.

“The board and executive... are conscious of their obligations under the Charities Act 2009 and the charitable purpose of the organisation. We strive to sustain Project’s stated purpose and objectives, namely to remain Ireland’s leading centre for the presentation and development of contemporary art, and to work with artists across all art forms to make and present extraordinary works that inspire and provoke.

“The artwork by Maser fits precisely with this remit. In presenting Maser’s work, we are facilitating the presentation of art by a highly regarded, award-winning street artist who has displayed artworks across Ireland, Europe and the United States. ”

A spokesman for the Charities Regulator confirmed it had written to the Project Arts Centre on April 12th “reminding” the board of its obligations under the Act.

“The office is not taking sides in any debate, but it is important charities remember that though they can engage in activities to promote a political activity, this must relate directly to the advancement of its charitable purpose. This is to protect donors to charities, and also the charities themselves.”

The spokesman urged all charities to read a guidance document on the issue, published on the regulator’s website in February.

In July 2016, the Project had to remove an almost identical mural by Maser, following a raft of complaints and a direction from Dublin City Council that it did not have planning permission.

In response, the Irish Council for Civil Liberties (ICCL) created two replicas of the image on the front ground floor windows of its building.

The Project said it would continue to place the vision and freedom of expression of the artist at the centre of its work.

“We firmly believe there is immeasurable value in creating space for artists and artworks that not only reflect our society, but also directly address and challenge its issues and complexities head on.

“Maser’s mural is an artwork that, in both its presence and absence, has proven itself to be a powerful emblem. It demonstrates the power of art to provoke debate, educate and communicate.”

A spokesman for the Charities Regulator confirmed the office had been in communication with the Project regarding the mural.

A referendum will be held on May 25th next on whether the Eighth Amendment to the Constitution should be revoked. The amendment guarantees to protect as far as practicable the equal right to life of the unborn and the mother. It prohibits abortion in almost all cases.