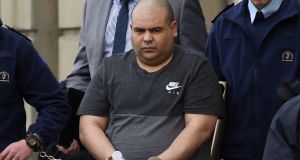 A notorious Dutch gang leader with links to the Kinahan cartel has been jailed for 18 years in Holland after being extradited there from Ireland.

Naoufal Fassih (37), a Dutch citizen of Moroccan origin, was arrested by the Garda in a flat in Dublin two years ago. He had watches valued at more than €50,000, bought for himself with the proceeds of crime.

He has now been jailed in Holland for 18 years for his role in a gun attack near Amsterdam in November 2015.

Almost 40 shots were fired and the victim was hit seven times, though survived. The Dutch police had undertaken a major investigation into the shooting with the aim of jailing those who conspired to carry it out. And Fassih, known as “Stomach”, now becomes the sixth person convicted for the shooting almost 2½ years ago.

The 18-year sentence was imposed at a court appearance on Thursday. The other men jailed for the attempted murder had already received 17- to 20-year sentences.

Fassih was convicted because he paid and instructed the gunmen who tried to kill Dutch national Peter Raap. Dutch police were searching for Fassih in Holland and abroad when he was arrested by the Garda at an apartment on Baggot Street in Dublin’s south inner city in April 2016.

Gardaí were carrying out a raid as part of their investigations into the Kinahan gang and when Fassih opened the door of an apartment that was to be searched the gardaí did not know who he was.

However, they believed he was linked to organised crime, specifically the Kinahan gang. And a search of the apartment strengthened those suspicions. He had a fake Dutch passport and a fake identity card from Belgium.

As well as the expensive watches found in his possession he was also wearing trainers worth about €800 and had more than €13,000 in cash. He initially gave gardaí a false name and said he was in Ireland to visit his girlfriend. But when further checks were made, including an international fingerprint database trawl, his true identity was revealed. And gardaí also learned he was on the run from the Dutch police over the attack on Mr Raap.

Fassih had been in Ireland for between six to nine months before he was discovered. After his arrest he was held in custody on foot of his extradition to Holland.

The High Court in Dublin was told he was being sought in the Netherlands to face allegations of attempted murder, assault, possession of false documents and money laundering, as well as for an alleged money-laundering offence in Ireland.

Ms Justice Aileen Donnelly ordered his surrender to Dutch authorities on each of the three European arrest warrants issued. Some of the most damning evidence against him was found on a Blackberry device belonging to one of the men who carried out the gun attack on Mr Raap, as part of a bloody gangland feud in Holland.

The Dutch police were able to decipher the encrypted messages on the Blackberry, including one exchange in which Fassih criticised the would-be assassins for failing to kill Mr Raap. In another message he warned them not to “mess up again”. Evidence that he paid €8,000 to have the shooting carried out also emerged during a bugged conversation in a car in Holland.