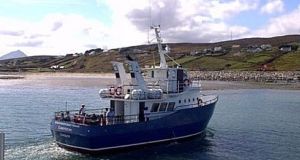 Minister of State for the Islands Joe McHugh says a new ferry will be provided in the long term as part of the Government’s Project 2040 plan.

Island residents on Tory, Co Donegal, have appealed for unity after a row over the outcome of a vote at the weekend aimed at resolving the dispute over the new ferry service.

Gardaí on the mainland were notified of the dispute, which is said to have becoming “very heated” after the results of a vote on the island on Saturday. A small minority of islanders who are not permanent residents were said to be very unhappy with the outcome.

The vote of 112 in favour and 103 against narrowly supported a package of measures drawn up by independent mediator Pól Ó Gallchóir, which included provision of a 12-seater fast ferry to run in tandem with the conventional vessel between the island and Machaire Rabhartaigh.

Mr Ó Gallchóir, chairman of Foras an Gaeilge and former chief executive of TG4, had been asked to mediate after islanders protested over awarding of a new ferry contract to a company with a 42-year-old vessel.

Although the MV Queen of Aran has been refurbished and surveyed, the islanders deemed it unsuitable for the sea journey. They said a promise of a new fast ferry had been made by Minister of State for the Islands Joe McHugh.

Mr McHugh says a new ferry will be provided in the long term as part of the Government’s Project 2040 plan.

Tory island co-op/Comharchumann Thoraí manager Marjorie Uí Cearbhaill said the row on Saturday may have erupted due to a misunderstanding about the nature of the vote.

A statement issued on Monday by permanent residents of Tory said that “in the chaos of the voting, there was a lot of confusion over the mainland vote and a lot of people became extremely agitated and insisted on being given a vote which left the committee and the manager in an extremely uncomfortable situation”.

The statement noted that there had been “a lot of chat on social media saying that the Tory community were saying ‘yes’ to the Queen Of Aran and this is untrue”.

“We simply voted in agreement with the recommendations on Pól O Gallchóir’s report,” the islanders’ statement added.

The islanders said that they believed any future votes should be confined to island residents only, and said they stood “firmly together” with the co-op committee and manager.

“We urge anyone who feels differently about this to re-look at the future of our island and re-visit Pól Ó Gallchóir’s proposal, and what we will achieve in accepting it,”the statement said, adding that “we pray that this may re-unite our island community once again”.

Mr Ó Gallchóir’s report, drawn up after 10 days of consultation on the island, also recommends increasing cargo runs from 26 weeks to 40 weeks per year, and extending the helicopter service provided by the Health Service Executive by at least two months over the winter.

It recommends reviewing handling of island transport tenders by Mr McHugh’s department. And this has been welcomed by Comdháil Oileáin na h-Éireann, the Irish Island Federation, in view of the recent dispute at Tory and over provision of air and sea services to the Aran islands.