Thousands of people take to the streets of Dublin for the annual March for Choice, calling for the liberalisation of Ireland’s abortion laws. Video: Ronan McGreevy 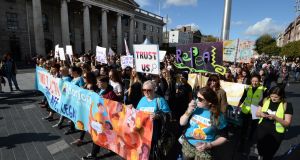 Thousands of people took to the streets of Dublin on Saturday calling for the liberalisation of Ireland’s abortion laws.

The demonstration began at the Garden of Remembrance at 2pm and progressed down O’Connell Street, before turning onto the quays and crossing over the Liffey. From there it proceeded up Pearse Street and towards the rally area in Merrion Square.

The procession took approximately 45 minutes to pass the Spire on O’Connell Street, with prominent representation from groups including the Abortion Rights Campaign, the Coalition to Repeal the 8th and the Union of Students in Ireland, as well as an array of left-wing political entities.

Organisers were claiming a turnout of more than 30,000 for the event.

Marchers called for an early referendum on the Eighth Amendment, which gives equal status to the life of the mother and the unborn, to be based on the recommendations of the Citizens’ Assembly for liberalised access to abortion.

Chants of “My body my choice” and “Hey hey, Leo, the Eighth Amendment has to go” were heard as protesters let off smoke bombs and held aloft signs reading: “Get off the fence Leo” in relation to Taoiseach Leo Varadkar’s stance on the issue.

There were no reports of flashpoints, and plans by some anti-abortion activists to hold counter-demonstrations along the route appeared not to have materialised.

The rally outside Leinster House was hosted by comedian Tara Flynn, and those in attendance heard a musical performance from Lisa Hannigan along with speeches from pro-choice activists.

In her opening speech, Abortion Rights Campaign member Angela Coraccio said the Eighth Amendment is “an instrument of torture” and described the country’s current abortion laws as “barbaric”.

Her colleague Caoimhe Doyle accused the Government of attempting to “get away with the minimum it can do” on the topic, and urged those present to make their local TDs aware of the necessity for “free, safe and legal abortion access”.

The crowd also heard from veteran women’s rights campaigner and former MP Bernadette Devlin McAliskey, who spoke of her disbelief at the situation regarding abortion in Ireland.

“We expect, and we demand, and we are entitled to exercise the same bodily integrity as every other human being on the face of this planet,” she added.

Strike4Repeal co-organiser Emily Waszak remarked on how homelessness, direct provision and a lack of sex education all act as impediments to abortion access in Ireland, particularly for migrant women.

“Anything less than full abortion access for everyone who needs or wants one is discrimination,” she told the crowd.

The event also featured comment on the effects of the Eighth Amendment on transgender and non-binary people living in Ireland.

Sympathy marches were held in 20 cities around the world including London, Sydney and Nicosia.

The March for Choice is the first major rally since the Government set an indicative timescale of early summer 2018 for a referendum on the Eighth Amendment.

Terminations are currently only permitted when the life of the mother is at risk and the maximum penalty for accessing an illegal abortion in Ireland is 14 years in prison.

Among those participating in the march on Saturday was Labour MP Stella Creasy, who was in Dublin to participate in an Irish Times Women’s Podcast held at the Irish Writers Centre before the demonstration. Ms Creasy, who made the trip from the UK, said the forthcoming referendum on abortion should be a “meaningful opportunity this settle this discussion” once and for all.

The Government should opt for a “big question rather than a little question” in relation to the issue of abortion, she said.

“What you have in your referendum is an opportunity to allow the public have a say on something that is such a powerful statement about the kind of society you live in,” she said.

The Irish Times reported earlier this week that the Cabinet is not minded to put a question to the people which would allow for abortion on demand, as they do not believe it would be carried.

However, Ms Creasy said that if the Government believed the public was not in support of a liberal abortion regime, they should not be afraid of putting that proposition to the public.

British Pregnancy Advisory Service (BPAS) chief executive Ann Furedi defended the use of the words “killing” and “end of life” in her book The Moral Case for Abortion.

A lot of thought

Ms Furedi told The Women’s Podcast she had given a lot of thought to the issue. While an embryo in utero could be classified as “clearly human”, it was not human life in the way that a person who is born is human life, she said.

“Is it human life that it matters as much as the woman who carries it? For me, I find it very difficult to make an equation between something that is biologically alive and human and something that doesn’t even know it exists.”

Mara Clarke of the Abortion Support Network said the organisation had last year financially helped 801 women from Ireland who could not afford to pay for an abortion in Britain.

Speaking at the podcast, she expressed confidence that the Irish public will vote in favour of liberalising abortion. “I can’t wait for our service to be obsolete”.

Irish women travel to Britain every year to have a legal abortion. With the prospect of a referendum having been on the horizon for some time, pro-choice and anti-abortion advocates have already been long campaigning on the emotive issue. Those efforts are set to intensify now a time frame has been set for the vote.

The rally in Dublin is the first big set-piece since Taoiseach Leo Varadkar announced on Tuesday that a referendum will likely be called in May or June next year.