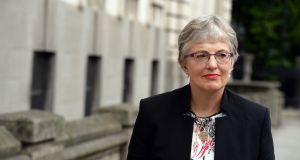 Minister for Children Katherine Zappone has said she is “deeply concerned” about venues withdrawing permission for anti-abortion and pro-choice group meetings because of pressure from rival organisations.

She said it was vital that people on all sides of the debate had an opportunity to gather in hotels and community centres to talk about the referendum on the Eighth Amendment, scheduled for May or June next year.

“I am deeply concerned to start reading about the fact that there may be less and less public places where citizens can gather to discuss matters. We have to find a way to challenge that,” she told The Irish Times.

Three Dublin hotels have cancelled anti-abortion events this week following complaints from pro-choice activists, according to the organising groups. Pro-choice campaigners have also complained that a number of other venues have withdrawn permission for events to be held on their premises.

Ms Zappone said she was concerned about “the potential behaviour of all sides”, and said those “in control of spaces where citizens can gather” should allow such events to proceed.

The Independent Minister, who represents Dublin South-West, has long advocated the repeal of the Eighth Amendment, which enshrines the equal right to life of the mother and the unborn into the Constitution.

Meanwhile, Sinn Féin’s Peadar Tóibín, four Fianna Fáil TDs and Independent deputy Dr Michael Harty are among the TDs who have signed a statement complaining about the “forced cancellation” of some events “with a pro-life ethos”.

Independent Senator Ronan Mullen and 10 TDs described as “unwarranted and deeply worrying” attempts to shut down any side of the debate, according to the statement released by the office of Independent TD Mattie McGrath on Friday.

Mr Tóibín lost the Sinn Féin whip temporarily in 2014 by voting against his party’s position on the Protection of Life During Pregnancy Bill.

“We specifically refer to meetings organised to facilitate survivors of rape who sought to offer their own particular perspective on the stigma and taboos associated with continuing with a pregnancy following such a traumatic event,” the statement said.

“As legislators we have the privilege of speaking in a protected forum where we can share our views no matter how diverse those views may be.

“We believe the equivalent rights ought to be protected for members of the public who may belong to groups or organisations with opposing viewpoints.

“Given that we are about to enter a prolonged period of public debate on the Eighth Amendment it is vital that we do not allow any precedents to be established which may make respectful dialogue between differing viewpoints more difficult to achieve.”