This time, the issue of mother and baby homes must be addressed

Even the story of Philomena Lee, as recounted in the film starring Judi Dench and Steve Coogan, did not stir the national conscience to action 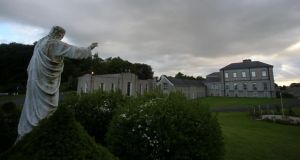 The Sean Ross Abbey in Roscrea, which was a home from 1930 to 1970. Photograph: Niall Carson/PA Wire

Eighteen years ago, on May 11th, 1996, Padraig O’Morain wrote in this newspaper about a woman he called Eileen, whose baby was taken from her in a mother-and-baby home and sent to the US for adoption.

It followed an announcement the previous month by Dick Spring, who was at the time the tánaiste and minister for foreign affairs, that files on the adoption of Irish babies in the US had been found. It was said this offered hope that birth mothers and children taken from them for adoption could meet again.

We’ve had four statutory reports since then on the abuses of children, and the McAleese report on the Magdalene laundries, but no investigation into mother-and-baby homes.

Even the deeply moving story of Philomena Lee, as recounted in the film ‘Philomena’ last year, did not stir the national conscience to action.

This latest story from Tuam has been reported around the world since it broke, two weeks ago. What brought global attention to the Co Galway town was the figure of 796 children who had died at St Mary’s in Tuam, between 1925 and 1961, and the words “septic tank”. The image of children being disposed of so barbarically outraged people across the globe.

According to the Ryan report, “in the 1920s and 30s the policy was implemented of providing ‘mother and baby’ homes for unmarried women who were having children for the first time. These were reserved for young mothers who had ‘fallen’ once only and thus were likely to be ‘influenced towards a useful and respectable life’.”

A 1928 department of local government report stated that “about eight ‘mother and child’ homes were set up for unmarried mothers giving birth for the first time. In 1922 the Sacred Heart Home in Bessboro, Co Cork, managed by the Sisters of the Sacred Heart of Jesus and Mary, was opened. Similar homes were established by the same Order in Roscrea, Co Tipperary, in 1930 and Castlepollard, Co Meath, in 1935.”

It continued, “The Sisters of Charity of St Vincent De Paul opened a similar institution on the Navan Road, in Dublin, in 1918 and the Sisters of the Good Shepherd opened a home in Dunboyne, Co Meath, in 1955. In addition, three special homes were provided by local authorities themselves in Tuam, Co Galway, Kilrish, Co Clare and Pelletstown in Co Dublin.”

The Protestant-run Bethany mother-and-baby home was set up in Dublin in 1921 and closed in 1972.

The woman interviewed by Padraig O’Morain in 1996 had been in Castlepollard, one of the largest mother-and-baby homes in Ireland.

It has been claimed that at any one time up to 200 young mothers were at Castlepollard. According to Mike Millotte’s book ‘Banished Babies’, 278 children from Castlepollard were sent to the US for adoption.

Research by Prof Maria Luddy of Warwick University at the Sean Ross Abbey home in Roscrea, Co Tipperary, where Philomena Lee had been, showed that the mortality rate for 120 babies born there in 1930 was up to 50 per cent.

Figures for Bessborough, in Cork, show the home had a mortality rate of 55 per cent in one of the years between 1945 to 1948, according to records by Dr James Deeny, Ireland’s then chief medical officer.

Eileen told ‘The Irish Times’ she had been told by a nun when she arrived at Castlepollard that “your name is Vera while you are here”.

She was there three months before the baby was born, and she “wasn’t allowed breastfeed” her baby. She was made to express her milk into a container at night, for feeding to the child.

On signing adoption papers she said, “I knew I was signing the baby away, but I was terrified not to sign it. I remember my hand was trembling, and I think it was the cruellest thing.”

She recalled that before her baby was taken “I didn’t sleep that night. I remember getting up and going in to bath him and dress him. I remember the little beige coat and the little bit of velvet on the collar, brown shoes and beige socks.”

A nun “just said to me, kiss and goodbye now, and she just whipped him away. I ran up to a window to try to see him. I was almost getting out the window. But I couldn’t see. All I could hear was the engine of the car. I kept listening until I couldn’t hear it any longer. Afterwards . . . there was nothing.”