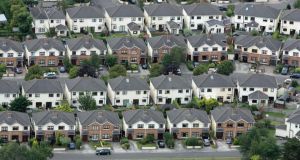 The Government should borrow “billions of euro” to invest in a massive social housing building programme, said the Nevin Economic Research Institute.

In a challenge to established thinking on how social housing should be funded, the institute said housing could be funded through “on the books” borrowing, as a strategic investment that would return key economic and social dividends.

The call comes as the Economic and Social Research Institute is seeking a significant investment in social housing to figure prominently in next week’s budget.

Minister for the Environment Alan Kelly, due to publish a social housing strategy later this month, said the key complication in devising a mass social housing construction programme is finance, due to a requirement that it be funded off the Government balance sheet, under European debt-to-GDP fiscal rules.

Dr Tom McDonnell, economist with the institute, said the building of mass social housing could be funded through exchequer borrowing: “At current borrowing costs we would support borrowing for social housing.”

He said the economy was set to grow by at least 2-3 per cent a year over coming years, while the cost of borrowing for Ireland was now historically low, at between 1.5 and 2 per cent a year.

“The long-term rate of return to the Irish economy from prudently targeted public investment is very likely to exceed the current cost of borrowing. There is a strong case for the Government to borrow to fund a large-scale programme of public investment focussed on areas such as social housing, education and high-speed broadband,” he said.

The Government meanwhile has been urged to lower VAT rather than income tax in the budget next week if it wants to give something back to the public in an equitable and sustainable fashion.

Nat O’Connor, research director with the Think-tank for Action on Social Change (Tasc) said cutting VAT by 1 per cent – at a cost to the exchequer of €350 million – would help to kick-start the economy by boosting domestic consumption and the spending power of lower income households in particular.

Tasc says changes to tax rates and bands “disproportionately” benefit higher earners but an increase in tax credits of €200 – at a cost of €260 million – would have the same benefit for someone earning €25,000 as €125,000.