Owen Keegan: ‘Not sure how much difference it would make, kids can still use jumpers for goalposts’ 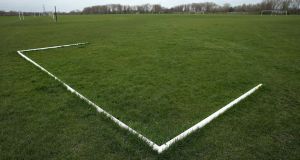 Goalposts lie on the turf at Hackney Marshes in London after Friday’s announcement that the Premier League has suspended all matches until Saturday April 4th, 2020. Photograph: Steven Paston/PA Wire

Children would still use “jumpers for goalposts” even if sports infrastructure was removed from public parks due to coronavirus restrictions, Dublin City Council chief executive Owen Keegan has said.

Mr Keegan was responding to calls from former Fine Gael TD Noel Rock to close all pitches in public parks by removing goalposts or installing barriers on the pitch to stop children, and adults, from playing football amid the coronavirus pandemic.

Gardaí at the weekend had to ask a group of adult men to stop playing football on a pitch in a park in Dublin 9.

Mr Rock said it might seem “a bit odd” to remove goalposts from parks but said it “clearly needs to be done. Safety is paramount here.”

However, Mr Keegan said he had “no plans to remove goalposts” from public parks.

“The notion that kids will stop playing football because the goalposts that were there one day are not there the next… well I’m not sure how much difference it would make, kids can still use jumpers for goalposts.”

The council last week announced the closure of all its playgrounds, but Mr Keegan said this was largely governed by signage. “If people are determined to get into the playgrounds, there is very little we can do to stop that, but we are asking them very clearly not to do so.”

Mr Keegan said the council will be prepared to take more stringent measures in terms of the full closure of parks, if instructed when the Government announces additional coronavirus restrictions later today.