Church of Ireland has twice as many students starting ministry studies 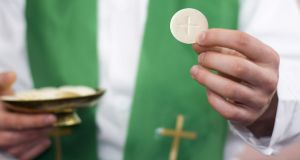 Six men have begun training for the Catholic priesthood at St Patrick’s College Maynooth this autumn, the lowest number since its foundation in 1795. Photograph: iStock

Just six men have begun training for the Catholic priesthood at St Patrick’s College Maynooth this autumn, believed to be the lowest number since its foundation in 1795.

There are 41 men studying for priesthood in Maynooth.

The six men admitted to Maynooth include two seminarians from Killaloe diocese, and one each from Tuam, Cork & Ross, Elphin, and Kilmore.

Earlier this year the Congregation for Clergy in Rome issued a document, The Gift of the Priestly Vocation, which strongly recommended that bishops around the world introduce a pre-seminary (propaedeutic) year for new candidates who wished to discern whether they had a vocation. Eight men have begun this propaedeutic year in locations around Ireland and abroad.

In August last year the college was at the centre of controversy when it emerged the Archbishop of Dublin, Diarmuid Martin, said he was no longer going to send seminarians there because of its “poisonous” atmosphere.

He said students were accessing gay dating apps and anonymous letters were being circulated accusing seminarians of misconduct.

The college administration said it shared “the concern” of Archbishop Martin about the “poisonous atmosphere”, created by anonymous correspondence and blogs. It added, however, there was “no concrete or credible evidence of the existence of any alleged ‘active gay subculture’,” at the seminary.

Last May it was announced a new president, Fr Michael Mullaney, had been appointed at the seminary and would hold office for the next three years as the Catholic bishops prepared plans to separate the seminary from the Pontifical University there.

A rector will then be appointed to oversee the seminary with a separate office of president appointed to run the associated university.