The future of homelessness: ‘Dublin has become a city of lost souls’

The pandemic has hurt Dublin’s poorest in many ways, but has brought improvements too 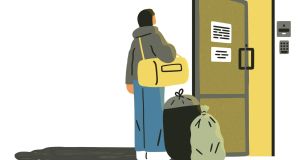 A midweek night. A European capital city. It should be a hive of people on the move - restaurants, gigs, bars, cinemas, shops, cafes should be buzzing with custom. The streets should be alive with people out walking, jogging and mingling freely, while roads hum with automobiles, bikes and scooters.

Wednesday night in Dublin, in the midst of lockdown, and the streets are abandoned.

At 9.50pm, on St Stephen’s Green there are two cars; no taxis on the rank, and a Luas headed for Sandyford sails past, empty.

Rubbish bags are waiting to be collected outside some shops on Grafton Street. The only sign of commercial life is light from Londis, where a couple stand in the doorway chatting to the young man behind the counter. Walking down towards College Green I pass five other pedestrians. A tent is set up at the entrance to the Lost Lane venue.

Westmoreland Street too is quiet. Two taxis pass, a bus is almost empty and a Deliveroo driver waits at the lights. Someone staggers in front of the bus on O’Connell Street, the screeching horn causing three people to turn and look.

Further down a young woman is crying, saying she is pregnant and needs money for a hostel, while another woman approaches, asks for a cigarette and bangs the palm of her hand loudly on a steel door when told I don’t have any.

Henry Street too is desolate. A man walking a dog passes six tents outside the former Debenhams store. Outside Zara a person, with a woollen hat over their head, is lying in a sleeping bag, on cardboard on wet concrete.

From here, over the Ha’penny Bridge and through Temple Bar to Dame Street the only people about are a few at bus stops, gardaí, Dublin City Council bin collectors, and a handful of people milling about, some in pairs.

Two volunteers from Portlaoise Action to Homeless (Path) are giving stew to a man who says he is from Russia and his name is Gennady, lying in a doorway on Trinity Street. Path have given him the two sleeping bags covering him. He has been sleeping out “for a few days” he says, following “fighting” with his family over his drinking.

The atmosphere feels edgy, a little menacing and, agrees Paula Byrne, chief executive of Merchants Quay Ireland, “like Dublin has become a city of lost souls”.

And while the pandemic has been negative in too many ways for Dublin’s poorest – especially those experiencing addiction and homelessness – bringing closed day services, online only counselling, increased isolation, fewer opportunities for begging and acute loneliness, it has also brought huge improvements, she says.

Anticipating this population’s extreme vulnerability in the face of a pandemic protective measures were rapidly put in place, by the HSE and the Dublin Region Homeless Executive.

Waiting times for methadone treatment were reduced from about four months a year ago to now less than a week; training in the administration of the anti-overdose medication naloxone was expanded quickly to more people, and crucially overcrowded emergency accommodations were cleared while vulnerable homeless were placed in own-door apartments and hotel-rooms.

“We’d hope that will all be maintained, and expanded further,” she says.

Claire McSweeney, senior emergency services manager with Dublin Simon agrees: “Our initial fears that Covid would spread like wildfire through congregated settings were alleviated because things like Stay City apartments were taken over. There was no messing about.”

It shows what can be achieved, she says. The questions now are will these improvements be maintained for some of Dublin’s poorest and most complex residents? And will they benefit or be excluded from a post-Covid city once the rest of us want a part of it again?

“If you asked me six months ago I would have been really optimistic,” says McSweeney. Though the quality of emergency accommodation improved greatly the number of single adults in homelessness has increased steadily, surpassing 3,000 in October for the first time since current record-keeping began, reaching 3,051 in November.

“I hope we can continue to move away from the old ‘normal’ of a sprawling, emergency accommodation system,” says McSweeney. “There is too much of it, we keep just adding more and filling it, and adding more, and filling it. It’s not sustainable.

“One thing I hope we have learned is we need top-notch emergency accommodation, where people have their own room. But they should stay only for a short time while we redirect them to housing. We need some policy direction on that which I’m not sure we have yet.”

The greatest, ongoing deficit in social housing provision is the dearth of homes for single adults.

David Carroll, chief executive of the De Paul homelessness charity agrees any post-pandemic reimagining of Dublin must include a commitment to a dramatic reduction in the use of emergency accommodation in the city-centre. This must not be done, however, by moving the homeless out of the city, but rather by providing suitable housing in the centre.

“We don’t want homeless people or people with other needs excluded from the opportunity to live in the city centre.”

There may be opportunities for Dublin City Council to buy or lease one-bedroom apartments for this population in the docklands, which according to estate agent Owen Reilly, working couples are now shunning as too small to work from home in.

Other possibilities could include repurposing co-living developments as short-term emergency accommodation. A risk would be that homeless people could end up in such unsuitable accommodation long-term, says housing policy expert Dr Lorcan Sirr.

Key to getting all this right, he says, could be the deployment of ‘co-creation’ in urban planning, where residents and other stake-holders are centrally involved.

“Antwerp is a good example. It does co-creation [AND]has beautiful central areas with whole spectrums of shops and a lot of people living in the centre on very affordable rents.

“Dublin needs a shake-up in terms of the quality of its physical environment and its offering for tourists and its citizens. The danger is we’ll come up with a plan to do that – Europeanise the city, make it more high-end – but we won’t bring everyone along with us.

“The danger is a post-pandemic city-centre could end up as a playground for the wealthy and educated, and anyone on less than €45,000 a year, never mind the homeless, not having any business being there. That would be a failure.”