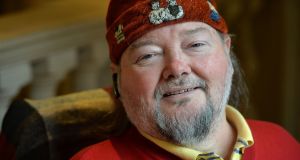 Lifelong campaigner for the disabled Martin Naughton has died, aged 62.

President Michael D Higgins described him as an “indefatigable advocate for human rights” who had gained widespread respect for his years of determined lobbying.

Mr Naughton died in Beaumont Hospital on Thursday surrounded by family and his personal assistants.

During his life he had determined to change a culture in Ireland’s past when, he said, the disabled were often considered “more someone who needed to be cared for rather than cared about”.

Born in Spiddal, Co Galway in 1954, he later moved to Dublin, where he remained a resident of St Mary’s Hospital in Baldoyle for 20 years.

He was born with spinal muscular atrophy and used a wheelchair from the age of nine.

“Martin Naughton gained widespread respect through his lifelong campaign for the inclusion of people living with disabilities and through his work with countless statutory and non-governmental organisations,” Mr Higgins said in a tribute on Thursday.

The Disability Federation of Ireland, the Independent Living movement, Áiseanna Tacaíochta, Disability Options and Vantastic were among the organisations with which Mr Naughton was associated.

“Having experienced in his early years the once-widespread practice of institutionalised living, he became a formidable and tireless campaigner for the right of people with disabilities to live in their own communities and homes,” Mr Higgins said.

“As a political activist, Martin Naughton had the vision, skills and determination to build solidarity between all those who strive for equality, dignity and the fulfilment of human rights for all groups in society, making him a valuable ally for a multitude of social justice groups.”

Mr Naughton spent a long time travelling during the 1980s, particularly in the US, where he learned much of the alternative lifestyles available to those with disabilities.

In an interview with The Irish Times in 2015, Mr Naughton spoke of his formative years campaigning for a better quality of life.

“If you summarise the past it was very much a medical model: the doctor knows best,” he said.

“It was to bring about a little bit of freedom so that people could get their hair cut the way they wanted.

“Today, everything is geared toward individuals having a choice. I think what you will see more and more over the next decade will be people with disabilities being the face of their community. I am very excited about that.”

Mr Naughton was a well known figure in the community and was never without one of a number of his trademark taqiyah-style hats.

John Dolan, chief executive at the Disability Federation of Ireland, where Mr Naughton had worked as a development manager, said he had “just kept going until everything stopped”.

“I have said he was never incremental. He wasn’t from the school of thought that said let’s get something better for now. For Martin, you started where the journey should end - real freedom, real independence.”