Apollo House not an ending but a beginning, activists say

Backers of campaign ‘are heroes in a country in dire need of heroes’, says Brendan Ogle 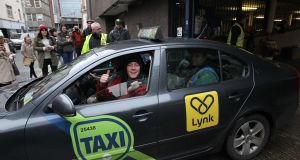 The occupation of Apollo House ended on Wednesday morning just short of a month after housing activists took it over to accommodate people who had been sleeping on the streets of Dublin city.

But the activists behind the occupation pledged on Thursday that it was not an ending, but merely the start of a campaign that will continue to help those who are homeless.

Shortly after 10am, several taxis drove through the gates of the office building and up the car park ramp.

In less than 30 minutes, seven taxis left in quick succession, with residents of the building carried in five of them and two apparently empty.

The residents have been moved either to housing or hotel accommodation paid for by the Home Sweet Home campaign, but their location will not be made public to protect their privacy.

About two dozen people, the remaining activists and volunteers, marched together down the ramp behind their Home Sweet Home banner, chanting their “homes for the homeless” slogan.

Praising the volunteers and all those who had backed the campaign, Brendan Ogle of the group said: “They are heroes in a country in dire need of heroes.”

They had turned it into a home thanks to a flood of donations of clothes, food, bedding and services provided by trade union volunteers.

“This has been a marvellous start to the Home Sweet Home campaign. In the last number of weeks, 78 people have gone from sleeping on the streets, through Apollo House, into stable beds, thanks to the volunteers who have been in there 24/7 and the general public who have connected with this national emergency in a way that we haven’t seen to date,” said Mr Ogle.

A large quantity of property and donated items now needs to be removed, said Michael Lynn SC for the Home Sweet Home group told the High Court on Wednesday. This would “take some time”, he said.

Some bedding and other items were already being moved out of the building early on Thursday morning and there was one removal van parked outside.

More than €173,000 has been raised by the Home Sweet Home group through an online funding page. Mr Ogle said the campaign was a “permanent intervention” in the homelessness and housing crisis. All the money raised had been accounted for and full details would be published next week.

“We committed . . . from the very outset to raise the bar of the minimum standards that have been provided to homeless people, people forced to sleep on the streets in this city,” said Mr Ogle, speaking outside Apollo House.

“In the last few weeks, what used to be one-night beds have gone to six-month beds. What used to be cover for eight-10 hours has gone to 24-hour cover.

“Last week, [Minister for Housing] Simon Coveney in a meeting with us committed to two new hostels, with own-key provision, supporting independent living, and the State has significantly ramped up the services it is prepared to make available to homeless people as a result of this campaign and the public who are behind it.”