A High Court judge has refused an application for an extended length of stay from the occupiers of Apollo House, who have said they will not vacate the building. 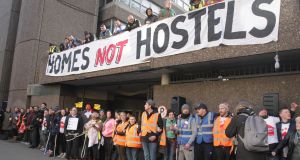 Protesters at Apollo House, Dublin, after a High Court ruling on the occupation. Photograph: Gareth Chaney/Collins 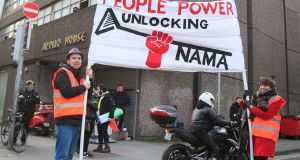 Protesters at Apollo House, Dublin, after a High Court ruling on the occupation. Photograph: Gareth Chaney/Collins

Receivers for Apollo House are likely to seek an order of attachment and committal against the members of the Home Sweet Home (HSH) group who are occupying the vacant Dublin city centre property, when the eviction case returns to the High Court on Thursday morning.

A High Court judge on Wednesday morning refused an application on behalf of those who have been occupying the building since last December for a stay on an eviction order issued by the judge.

The order was granted to the property’s Nama-appointed receivers Mazars on December 21st and came into force at noon on Wednesday.

Following Wednesday’s ruling, the HSH coalition said it will not comply with the eviction order.

Campaigners from the HSH coalition, which has organised the occupation in order to provide accommodation for homeless people, and members of the public linked arms around the outside of the building as the noon deadline for the eviction order passed.

The coalition said it would stay in the building as promises made to it by Minister for Housing Simon Coveney on finding suitable alternative accommodation for Apollo House’s homeless residents had not been honoured.

On Wednesday night, nine homeless people remained in the vacant office building, along with a number of HSH activists.

The HSE coalition said that the remaining residents were “most vulnerable people” who have nowhere else to go.

It said it would not “leave Apollo House and leave them behind”.

In a statement on Wednesday night, the coalition said it was “examining all options”, including sourcing other accommodation “which is not subject to a court order”. This could include hotel accommodation.

The coalition said the alternative accommodation that had been offered by the Dublin Region Homeless Executive did not meet the needs of the remaining residents.

“One resident reported that he was offered a room with blood on the walls and mattress, and syringes on the floor,” said the statement.

A spokesman for the Peter McVerry Trust, which has been offering alternative accommodation to Apollo House residents through the executive, said the allegations about their shelters were “just not true”.

The trust said that, by the court deadline, its staff had re-accommodated 76 people from Apollo House.

At the High Court on Wednesday, Mr Justice Paul Gilligan refused the application to extend the length of time the occupiers were allowed to stay in Apollo House.

He said it was “not appropriate” for the High Court to decide on the suitability or quality of the alternative accommodation on offer for residents, despite claims made by HSH campaigners that such accommodation is inadequate.

He said the occupation was illegal and the court could “not stand idly by and allow the trespass to continue”.

He said that, while he had sympathy for the aims of HSH, he had to “apply the law in respect of private property”.

If he did not, he said, and the situation was “allowed to drag on”, people might think the courts take a benign view of illegal trespass.

He said this would be “an intolerable situation in a democratic state”.

It was open to the HSH to bring a case in relation to the quality of the alternative accommodation in separate proceedings, he said.

Separately, with temperatures set to plummet in coming days, the number of outreach workers for rough-sleepers in Dublin is to be doubled.

Two outreach teams, operated by the Peter McVerry Trust and Focus Ireland, will operate extended hours, from 7am to 1am, and will have access to additional emergency beds.

“Normally, the team can call on 38 emergency beds which are ring-fenced for vulnerable people they come across,” a spokesman for the organisations said.

“During the cold weather, other NGOs have pledged to make ring-fenced beds available.”