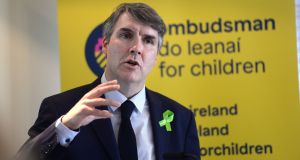 Niall Muldoon, Ombudsman for Children, said: “As a society, we need to look at what we can do to help resolve outstanding issues that are associated with direct provision services in Ireland.” Photograph: Dara Mac Dónaill

The number of children kept in “wholly unsuitable” conditions at direct provision centres across the country has risen by more than a third over the past three years, latest official figures show.

Latest figures show 1,547 children are being held at 34 direct provision centres in 17 counties countrywide as their parents await the outcome of their applications for asylum in Ireland.

The majority of the children are from Nigeria, Zimbabwe, Pakistan, Albania and the Democratic Republic of Congo.

The rise has been criticised by children’s charity Barnardos, which says the system is diminishing the lives of children confined to the centres. “Simply put, the direct provision system is no place for children and the longer a child spends in this system the more their well-being and development will be hindered,” said June Tinsley, head of advocacy for Barnardos.

“Barnardos is dismayed by the reported increase in the number of children living in direct provision,” said Ms Tinsley. “Through our work we see first-hand the daily impact life in direct provision has on a child’s mental and physical well-being, social and emotional development and educational outcomes.

“While originally envisaged as a short-term living arrangement, we know some children are tragically spending years in this wholly unsuitable system.

“Many of these children have fled significant trauma in their country of origin only to end up living in unsuitable and overcrowded accommodation, on extremely meagre means and without basic facilities most of us would consider essential for a happy and healthy childhood – somewhere to play and feel safe, do homework, have friends round and have culturally appropriate food.”

Ombudsman Mr Muldoon told The Irish Times no child should grow up in direct provision.

“In the meantime, as a society, we need to look at what we can do to help resolve outstanding issues that are associated with direct provision services in Ireland,” he said. “We will continue to raise with the Department of Justice and Equality our ongoing concerns about children growing up in such inappropriate environments and the adverse impact on their young lives.”

Mr Muldoon added that he was disappointed with delays in the processing of asylum applications.

In June, the Economic and Social Research Institute warned asylum seekers are now waiting an average of 18 to 20 months to finish the first stage in the process, compared with about 11 weeks in 2015.

Minister of State at the Department of Justice and Equality David Stanton said improvements to living conditions for refugees have been “significant over recent years”.

“These include the implementation of self or communal catering arrangements in a number of accommodation centres,” he said. “As a result of this initiative, over 1,500 residents are now able to prepare meals of their own choosing.

“In addition, there have been improvements to a number of outdoor playgrounds and football pitches to provide for ‘all-weather’ facilities and the introduction of teenagers rooms in centres to provide social areas for this age group.”

A spokeswoman for the Department of Children and Youth Affairs said neither the department nor the Minister for Children Katherine Zappone had any comment to make on the figures.