State ‘walking back’ from apology to Magdalene survivors, says UN 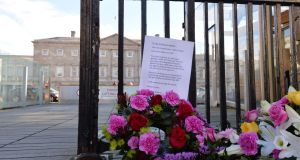 A wreath in honour of former residents of the Magdalene laundries at the gates of the Dáil in 2014. File photograph: Alan Betson/The Irish Times

The United Nations has sharply criticised the State’s approach to alleged abuse in Magdalene laundries and its claims that there was no basis to believe serious harm was done to women and girls in them.

The UN committee against torture in Geneva said it had received a “great deal of evidence that there has indeed been abuse”.

She also asked if the State could claim there was no serious harm “when it made no public call for evidence”.

The UN rapporteur also suggested: “The government seems to be walking back from the famous apology by Enda Kenny” to survivors of Magdalene laundries and going back to a view that the State is not liable.

Ms Gaer was speaking during a public hearing by the committee which is reviewing the State’s human rights record.

The committee has asked the Government to invite a UN “special rapporteur on the promotion of truth, justice, reparation and guarantees of non-recurrence” to visit the State on the issues of Magdalene laundries and mother- and-baby homes.

It referred to “widespread concern that Ireland has not thoroughly investigated abuses at mother-and-baby homes” including alleged illegal forced adoptions of children born out of wedlock and without the permission of the mothers.

The committee noted the State’s investigation of a reported 18 institutions “when there may be as many as 70 involved” and asked if the Government would expand the scope and terms of reference of the commission of investigation to identify deceased children at the sites of mother-and-baby homes.

Minister of State for Justice David Stanton led a delegation of 21 Irish officials to the hearings. Ireland’s outgoing Ambassador to the UN in Geneva Patricia O’Brien also attended.

Mr Stanton, in an opening address, provided updates on changes since 2011 including issues relating to the treatment of prisoners, domestic violence, abortion, protection of refugees and asylum seekers and social legacy issues including the laundries.

He said the State “accepts that it cannot be proud of certain aspects of its social history”.

Referring to the Magdalene laundries redress scheme, he said it had paid out more than €25.5 million to 677 women and 10 new applications had been received this year. The scheme was established after an interdepartmental committee report in 2013 on the State’s involvement in the laundries.

The UN committee said non-governmental organisations “were not satisfied that the Government is not intending to set up an investigation into Magdalene laundries”.

Ms Gaer asked Mr Stanton: “Can you confirm whether the Government still stands behinds the taoiseach’s apology?” She asked why complaints made to gardaí by survivors had not been acted on.

She said the interdepartmental committee on the laundries may not have “thoroughly” investigated the archives of the religious orders.

The rapporteur said it was “quite troubling that the interdepartmental committee destroyed its copies of evidence from religious congregations that ran these laundries and will not provide public with information.

“What is preventing the Government providing public access to the archive?”

The UN rapporteur said the committee had received information about the archives of the Diocese of Galway which was not accessible.

Information was received about the practice of “calling Irish police to prevent the removal of women from Magdalene laundries by their families” and that this information was given to the Department of Justice.

Ms Gaer said the Government should at least facilitate the availability of these archives.

The committee expressed concern about exclusion from the redress scheme of women not formally held in the laundries but forced to work there.

It also asked about the level of advertising of the scheme outside Ireland, particularly in the US where “clearly the size of the diaspora suggests more survivors there”.