Men ‘look creepy at you’ - children in direct provision speak out 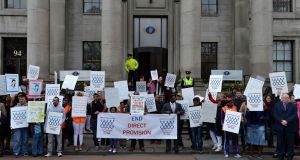 Asylum seekers, refugees and human rights supporters protest at the Department of Justice in Dublin, calling for an end to the direct provision system. File photograph: David Sleator

Children in direct provision have spoken of “not liking anything” about their lives, of being “looked at in a creepy way” by men in their centres, and of worrying about their mothers.

Others have also spoken about liking the community where they live, the homework clubs and living near beaches or in town centres.

These are among the findings of a Government consultation with 110 children, aged between eight and 17, living in 11 direct provision centres across the State.

Separate consultations were conducted with eight to 12 year-olds, and with 13 to 17 year-olds, with themes identified and secret ballots to establish the issues the children felt most strongly about.

“The main message that emerges from the data is that, on the whole, children and young people living in direct provision are dissatisfied with the system and say that their personal wellbeing, family life, private life and social life is adversely affected by long stays in the direct provision centres,” says the report.

Children described their accommodation as “overcrowded” and “dirty” and the direct provision system as “not fair”, “not safe”, and many spoke about older men “taking over” the TV and recreation rooms.

“There are loads of men bothering us,” said one, while another commented: “There is so many men, and . . . they look creepy at you.”

The diets were described as “horrible and disgusting” and “unhealthy” by older groups, and as “always the same” and “the food has no taste” by the younger children, with several expressing the wish their mother could cook for them.

At the time of the consultations, the weekly direct provision allowance was €19.10 for adults and €9.60 for children. It is due to increase next month to €21.60 for both adults and children.

Children spoke of the poverty they experienced under these rates, with some saying they couldn’t go on school trips, and a younger child commenting: “These days shoes cost €30, so how are we supposed to pay for other stuff?”

One teenager said the staff at their centre were “kind, giving, helpful, playful”.

Many worried about their mothers coping with poor facilities and their family’s lack of money.“And my mum don’t work. She stays in the room all the time,” said a younger child.

Among the messages for policymakers, says the report, are that children appreciate the facilities, especially the play and recreation facilities and homework clubs when provided, and like some centre managers and staff.

However, they are unhappy about the length of stay in the system, with a number of children saying they have lived in direct provision since they were born. They are stigmatised because of where they live, are unhappy with being poor, and, worry about their education when they have no space or support for homework.

Minister for Justice Charlie Flanagan said the report would make “an important contribution to our policy development in this area”.

“The stories of children and young people living in State-provided accommodation continue to contribute to the ongoing improvements in services in accommodation centres.”

Tanya Ward, chief executive of the Children’s Rights Alliance, welcomed the report and called on Government to “listen to the children’s voices”.

“It is alarming that children struggled to identify things they liked about their lives and yet could easily discuss about what they did not like,” she said. “We call for this report to be debated by both Houses of the Oireachtas and for the outstanding recommendations of the Working Group report to be implemented without delay.”