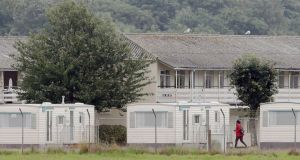 People caught up in the direct provision system are being denied hope by the State and forced to live in a system which is worse than prison, the chairman of an expert group set up to review to the scheme has said.

Former judge Dr Bryan McMahon said anyone forced to live in a system that denied them the right to work or study and determined almost every aspect of their life without any indication as to when their circumstances might change “would go mad”.

Dr McMahon, who chaired the review group which published a landmark report on the system more than two years ago, said people were effectively being “incarcerated, locked away and [left] in a limbo of sorts”. More needed to be done to expedite cases, he said.

‘Prefer to be in jail’

He said that when he was working on the report into the system he had visited multiple centres and spoken to many people caught up in direct provision.

“Some of them said to me: ‘I would prefer to be in jail because I would have a definite sentence and I would know when I was getting out.’”

Direct provision is the process through which the State deals with asylum seekers. The weekly direct provision allowance is €19.10 for adults and €9.60 for children. It is due to increase next month to €21.60 for both adults and children.