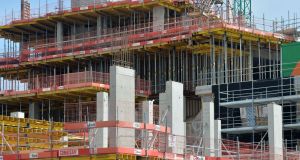 The building site for the National Childrens Hospital, where construction has been halted due to coronavirus restrictions. Photograph: Alan Betson

Trade union Unite has urged more construction sector employers to avail of the Government’s Covid-19 temporary wage subsidy scheme, saying it is “morally unacceptable” for profitable contractors to opt for layoffs instead.

The union, which represents workers throughout the sector, has written to Minister for Finance Paschal Donohoe to express concern at the failure of many companies to register for the scheme.

The union’s comments come as the Revenue Commissioners reported that €2.7 million of funds under the temporary wage subsidy had not been paid because a group of 570 employers had failed to set up the refund accounts with the tax authorities that are required to refund payment to companies.

Revenue did not identify which sectors the 570 employers were in.

Unite regional officer Tom Fitzgerald said the scheme offered the only mechanism whereby employers can retain workers on the payroll and receive a wage subsidy, which they can then, if they choose, top up to pay workers their full wages.

“Over the past fortnight, Unite has been in constant contact with our members and has written to a range of companies encouraging them to avail of the temporary wage subsidy scheme. We are advised that a number of companies have decided not to register for the scheme,” Mr Fitzgerald said.

“Companies in the sector have profited significantly from their workers’ skills and experience. It is morally unacceptable and economically shortsighted for such profitable companies to react to this emergency by simply laying workers off.”

In some cases, the union said the reluctance to avail of the scheme may be because of perceived cashflow issues that haven’t transpired, or it may relate to a step effect that sees the maximum subsidy fall from €410 to €350 above a certain level of earnings. Unite said it had highlighted this “anomaly” to the Minister.

However, the trade union believes some employers may have decided it is more straightforward for them to lay off workers rather than avail of the subsidy scheme.

“I would be concerned that the reason employers are not taking this is up is that it raises the vista of a top-up,” said Mr Fitzgerald.

Unite is now calling on construction employers to “step up to the plate” and register for the scheme.

Mr Fitzgerald said the problems announced on Friday by Revenue were likely to be an administrative hiccup in a small number of cases that employers could easily resolve.

It is critical to the Irish economy that the construction sector engages with the Government and Revenue “to iron out any anomalies” and maintain the link with its workers, he said.

“Any failure by individual companies to retain experienced and skilled workers could hamper the ability of the sector to get off the ground quickly.”