Share of income going to top 1 per cent has increased, Tasc report says

Measures to tackle excessive pay to richest, and to increase wages of lowest paid needed 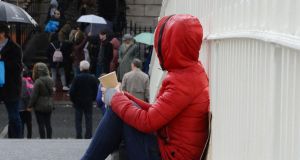 Measures to tackle “excessive” pay to the richest one per cent, as well as wage increases for the lowest paid workers are essential to tackle increasing inequality, a report published on Wednesday warns.

The annual equality report from the progressive think-tank Tasc (Think tank for Action on Social Change), The State We Are In: Inequality in Ireland 2020, says while the richest 1 per cent continues to increase their share of national income, just under a quarter (23 per cent) of workers are in low-pay jobs – particularly in wholesale, retail and hospitality.

Even this may be understated, however as the data rely on surveys where “high incomes tend to be under-reported” in responses.

“If incomes at the top are becoming more concentrated the problem may get worse as there is a greater incentive to hide and under-report”.

According to the report, Ireland’s retail and hospitality sectors use low-paid workers more intensively than these sectors do in other countries. Some 23 per cent of wholesale and retail workers are low-paid while 39 per cent of workers in hospitality are.

“In other words it is insufficient earnings, not an unbalanced economy which drives Ireland’s higher rates of low pay.”

The report says: “Ireland has many households with no market income”. This means they have no income from the labour market and are completely reliant on welfare transfers.

Among the reasons for the high numbers in this position, “are the many lone parent households [and] a low employment rate among lone parents, and many adults living alone who report being disabled or unable to work”.

Also relevant is Ireland’s “less developed system of occupation and private pensions which leave many older household without income” beyond the State pension.

Any strategy to address inequality “has to address low pay”. The report suggests greater trade union presence in low-paid sectors would help.

However, high wages at the top should also be addressed.

“Higher taxation on top incomes is the most obvious solution. High marginal rates however tend to increase incentives for avoidance, especially among the rich who have most to gain. A better solution would entail reforms that tackle excessive compensation at source”, says the report.

Among Tasc’s calls are for a renewed effort to reduce the cost of living, especially in housing and childcare. Better and more public services would “facilitate employment among lower income households”.